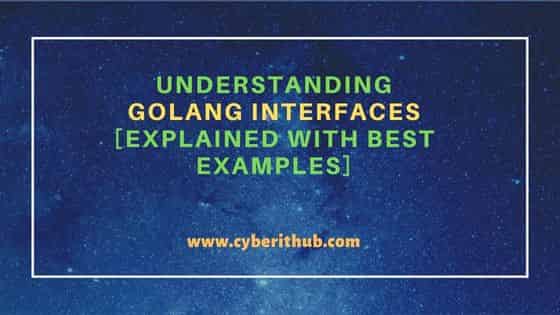 In this tutorial, we will understand Golang interfaces with the help of some real world examples. Go does not directly support Object Oriented Programming (OOP) because it does not contain the concept of classes. But methods and interfaces can be used to implement object oriented code in Go. This article assumes that you understand methods, therefore we will explore interfaces and how to implement interfaces in Go.

The interface above suggests that any type that can drive, stop and reverse can be treated as a vehicle. If we create a type, and define the Drive, Stop and Reverse methods for it, we can say that the type implements the interface Vehicle. Let's write a program to implement the Vehicle interface.

In the snippet above, Car is a new type defined with its underlying type as a string. We attached the Drive, Reverse and Stop methods to Car to implement the interface Vehicle. A value of type Car is now an instance of Vehicle. Let’s demonstrate that in the main function. 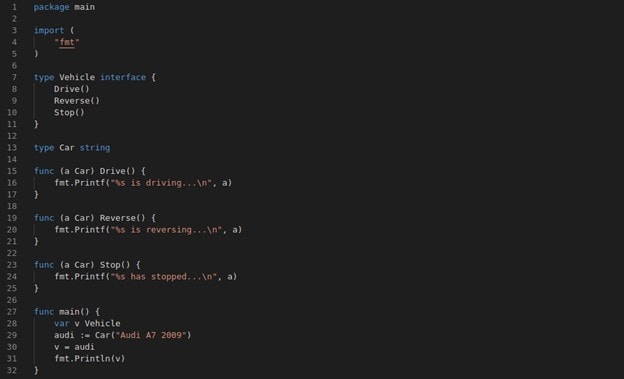 An interface is used when you have two or more types that behave the same way. The example above is only trying to portray how a type can implement an interface, and its effect. Let's modify that example to a practical example where interfaces are needed.

The program above notifies a user that their vehicles have stopped and are refueling. From line 14 and 28, we define two types Car and Bus, then define methods to implement the Vehicle Interface. On line 42, we define a refuelVehicle function that takes in a Vehicle and informs the user that the vehicle has stopped, and is refueling. Since Car and Bus both behave the same way, and implement the Vehicle interface, we were able to add variables of both types to a slice and refuel them in order.

Let’s examine a very popular example of using an interface in the Go standard library. The package io defines an interface Writer which contains a single method.

Writer defines any type that can be written to, such as a file, network, buffers, http clients and so on. Any type which has the Write() method as shown in the program above implements the Writer interface.

From the fmt package, Fprintf accepts an io.Writer and a value to write to the Writer. Fprintf in turn, calls the Write method on Writer with the value passed in as its parameter. Let’s see the implementation of Fprintf from the standard library.

From the snippet above, we see that Fprintf just calls the Write method of Writer on line 205. This means that Fprintf can accept any value of a type that implements the Writer interface (has the Write method). From the fmt package, Printf takes advantage of this quality to write a value to a variable of type  *os.FIle named os.Stdout. os.Stdout is the default output stream of your computer (/dev/stdout on a linux machine). Let’s see the definitions of  fmt.Printf.

With this understanding, we can define a new type that implements the Writer interface, and pass it into fmt.Fprintf. Let's demonstrate this below.

Notice the naming convention for an interface with a single method. The interface is named by adding -er after the method name. Other examples that use this convention from the standard library are Closer and Reader containing the Close and Read methods respectively.

A type assertion is implemented using the expression value.(T), where value is a variable of type interface{} and T represents the datatype to convert value to. If T is not the dynamic type of value, the compiler panics. Let's write a quick example to describe this behavior.

A type assertion can be used to assert any interface to its dynamic type, but in most cases, it is used with empty interfaces.

Type switches are like switch statements, except that each case specifies types and not values. A type switch is used to compare the dynamic type of an empty interface against multiple types. Let’s see how this works below. 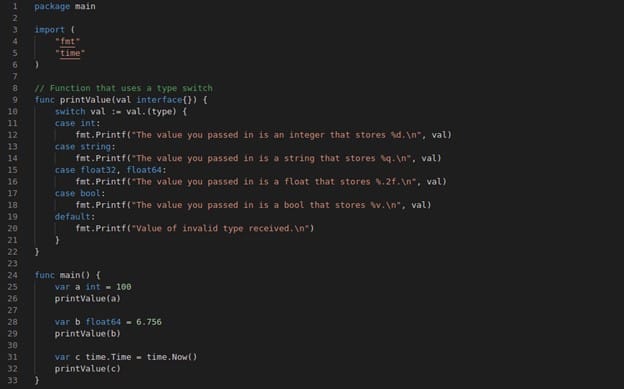 The type switch works by converting the empty interface value into each data type at each case until it finds the one that satisfies the interfaces’ dynamic type. Type switches are usually applied within functions that accept any value and execute actions based on the type of the value received.

From the builtin io package, there’s an interface called ReadWriter, this is a combination of the Reader and Writer interfaces. ReadWriter is defined like:-

The first example we used in this article uses a value receiver to implement the interface Vehicle. Let’s modify that example to use a pointer receiver instead. 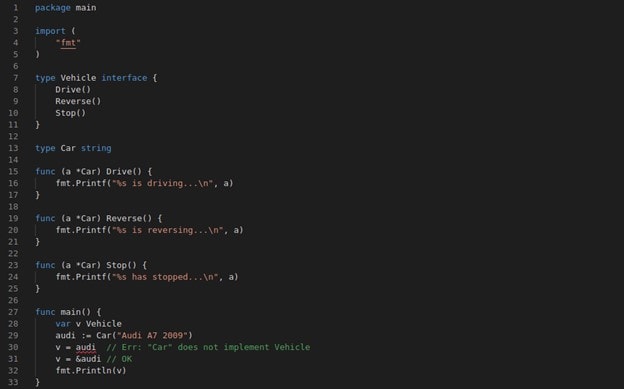 Let’s see an example to explain how this works. We will write a program that helps a landlord calculate the total amount of rent due at a particular time. 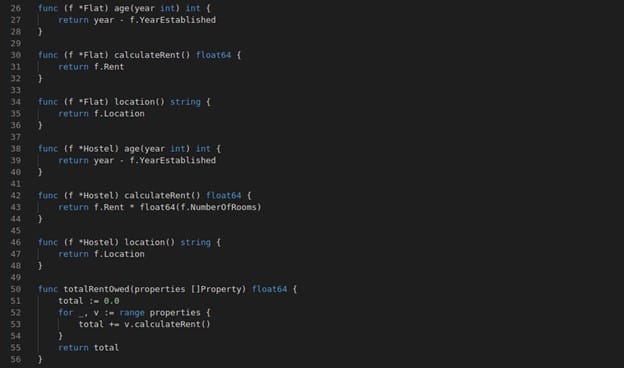 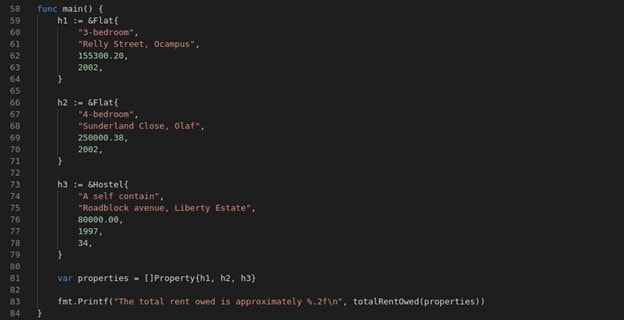 In the program above, from lines 5 - 9, we define an interface Property containing the methods calculateRent(), age() and location(). We then define two structs Flat and Hostel and define methods on them to implement the Property interface. Between lines 50 - 56, we define the totalRentOwed() function to accept a slice of Property and return the total rent owed from each property.

In the main function, we defined variables of type Flat and Hostel, and added them to a slice named properties. We were able to pass properties into totalRentOwed() since each slice element implements the Property interface. If we run the program, we get the result below.

We were able to polymorphism in the totalRentOwed() method since it accepts values of different forms and implements them in the same way. If the landlord from the program above decides to purchase and rent out a duplex, we can easily create a type for it and implement the Property interface. Polymorphism then allows us to calculate the total rent, including the rent of the duplex, with totalRentOwed().

Interfaces are a very powerful tool in Golang for writing decoupled and maintainable programs. Some programmers start writing programs by declaring interfaces, then defining types to implement them. This can most times lead to writing unnecessary interfaces where methods alone may be more efficient. Interfaces should be used only when you notice your program has types with similar behaviors.