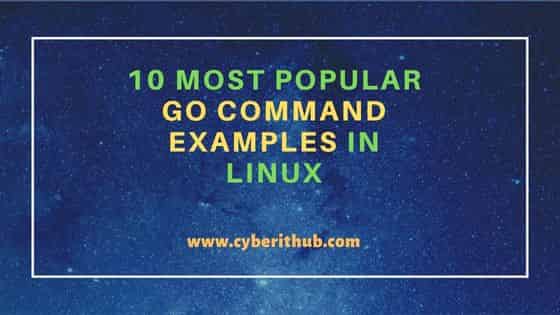 In this article, I will take you through 10 Most Popular GO Command Examples on Linux. You might be wondering why we need to study GO Programming Language. It is because of its wide availability on a variety of platforms, its robust well-documented common library, and its focus on good software engineering principles, Go is a great programming language to learn.

Like other most often used programming languages like Java, GO does not have any provision for try, catch block statements. If someone is looking for a feature like Concurrency, then this is the Programming language you want to learn. In this article, we will go through popularly used go command examples in Linux. We will see more on later articles.

You can check the GO command version by using go version command as shown below. As you can see from the output, currently installed version is 1.10.4.

If you want to see all the environment variable information which is used by GO, you can see it by using go env command as shown below. You might notice from the output, go uses environment variable for setting architecture, PATH, OS, compiler and other important parameters.

Example 3: Remove all the Object Files

If you want to remove all the previously created object files from your system, then you need to use go clean command as shown below. This command will clean up your system.

If you want to list all the packages and dependencies, then you need to use go list command as shown below.

To build and run your program directly with specifically building the program first, you need to use go run command as shown below. This command is usually used for small projects where you do not have many code files.

Many times you might have observed that updating the go version will do changes in API support and the previous written code might not work properly. In those situations, go fix command will be very handy to fix those issues and make your code as per the latest release.