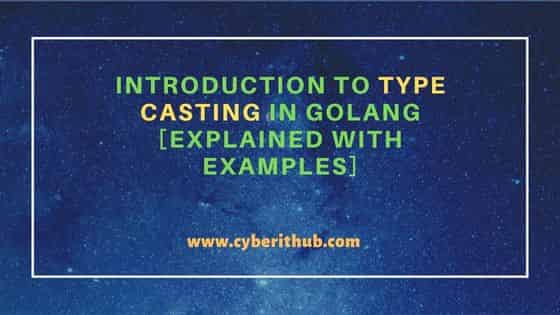 Type casting is the conversion of variables or data from one data type to another. In most cases, a variable of any type can be converted to another, but that does not guarantee that the data will be intact or preserved. In the previous tutorial, we have talked about how to use methods in Golang. In this tutorial, we will walk through type casting in Go, its uses, and practical examples of type casting.

Introduction to Type Casting in Golang [Explained with examples]

Also Read: How to Use Methods in Golang [Explained with Best examples]

Type casting involves converting variables between data types. In Go, there is no official term as type casting, instead it is called Type Conversion. In other languages like C and C++, the compiler can perform automatic type casting, but Go doesn’t allow that because of its robust type system.

The general syntax for converting between types in Go is:-

The format above converts type_expression in a known type to the type specified by Type_name.

Go contains a number of built-in integer types. Variables of these integer types can be converted between each other using the general syntax of type conversion.

Please note all code samples in this article were run on a 64-bit Ubuntu 20.04 Linux environment.

When converting from a larger integer type to a smaller type, you have to ensure that no information will be lost after conversion. Each integer type has a range of values it can store, therefore converting a value to a type with a lower range will result in an overflow.

In the snippet above, we declared an int16 variable, val1 and initialized it to 130. We then declared an int8 variable val2 and cast the value of val1 into val2 on line 12. An int8 value cannot store the number 130, therefore 130 from val1 will overflow into val2. This means that the difference of which 130 is greater than the maximum value of int8 is added to the minimum value of int8.

You may declare a new data type where the underlying type is an integer type. Go allows you to convert between variables of compatible underlying data types.

Go allows you to easily cast a variable’s data type from float32 to float64 and vice versa using the general type conversion syntax. It is not advised to cast between both float values in code because it could introduce indefinite values within your code.

A string data can easily be cast into a slice of bytes. This allows a byte in the string to be changeable. Let's show a practical example of applying this technique.

Also, when passing an argument into a function call, we can cast the current value to the type needed if it is inevitably in another compatible type. The same principle applies when returning a value from a function. Let’s see an example of a function that converts a value in a certain base to base 10. 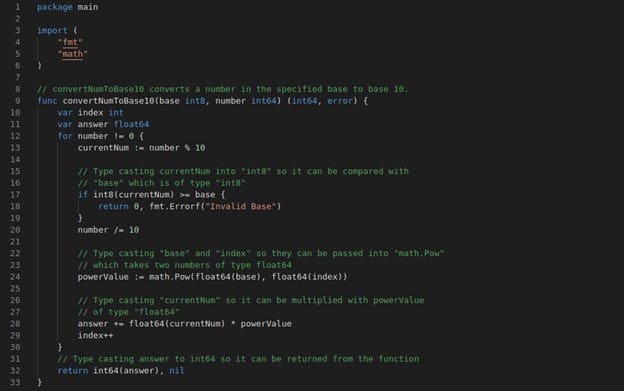 In the function above, there are four cases of type casting which are:-

Less type casting within a program improves code readability and organization. The function above can ultimately be improved to include less type casting. The application of typecasting described above also applies to operations involving strings and a slice of bytes.

We can use the general type casting syntax to convert between two structs with the same number of fields, field names and field types. 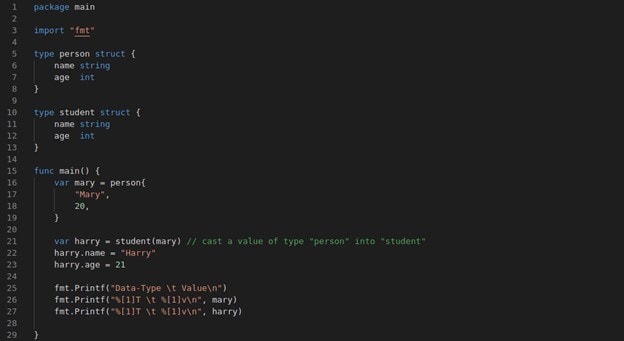 We can cast between two functions if they have the same signature. A typical example where this is applied is when creating a web server using the inbuilt net/http package. Let's show an example of how this works below.

The snippet above is a http server with a single handler that returns “Hello World”. Between lines 8 to 10, we declare a function which has the same signature as a typical http handler. On line 13, we then cast helloHandler to the builtin type, http.HandlerFunc which has the same function signature as helloHandler. The definition of http.HandlerFunc in the builtin net/http package is shown below.