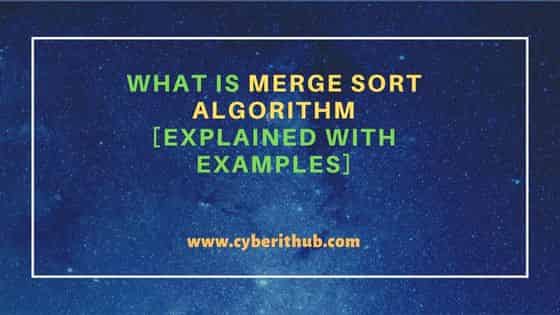 In this article we will look into another sorting algorithm called merge sort algorithm. Like quick sort it is also based upon divide and conquer strategy, in which we break problems into many subproblems which are similar to the original problem, then solve each problem recursively and later combine all subproblems into one to create a solution of the original problem. It is preferred over quick sort because it has time complexity of O(n*logn) in the worst case and also it is more efficient and faster than the quick sort algorithm for large datasets.

What is Merge Sort Algorithm [Explained with examples]

Also Read: What is the Quick Sort Algorithm [Explained with examples]

As we discussed , this algorithm uses divide and conquer strategy. It is one of the most efficient and faster sorting algorithms which is widely used and popular. Sorting algorithms means to arrange the elements in a particular order either in increasing or non-increasing. We sort elements because it is easier to locate an element in an ordered list than an unordered list.

Lets understand the working of the merge sort algorithm with the help of this diagram. 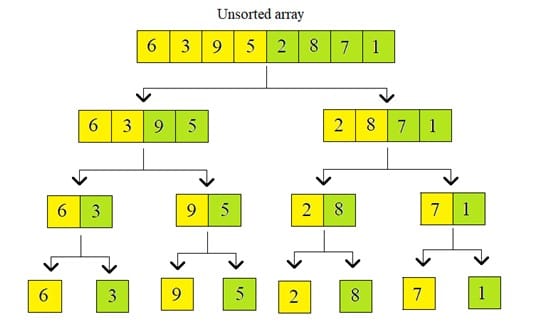 In merge sort we first divide the array into two sub arrays of n/2 elements each where n is the total number of elements in the array and we go on dividing the array until the subarray contains only one element. Then after dividing , we merge from bottom to top in a sorted manner. Lets understand this point in the following image.

As we can see we are merging the elements in such a way that it is getting sorted.

Now you must have understood the basic concept of merge sort. Let's see the pseudocode of the merge sort algorithm and its explanation too.

As these are recursive functions it means they are calling itself repeatedly , so when the first half will come again into the mergeSort function with its parameters arr, start, mid so it will again check whether start is less than end (now it has become mid in this case) or not and again same process will repeat until there is only one element is left.

First we create two arrays (P and Q)  for which we calculate the number of elements in these arrays as follows:-

As new array p contains n1 + 1 elements i.e. 3 elements and same as array p , array q contains 3 elements. Now the two for loops are used to copy the same elements from the sub-array which we are merging. And then at the end of each new array we are putting infinity. 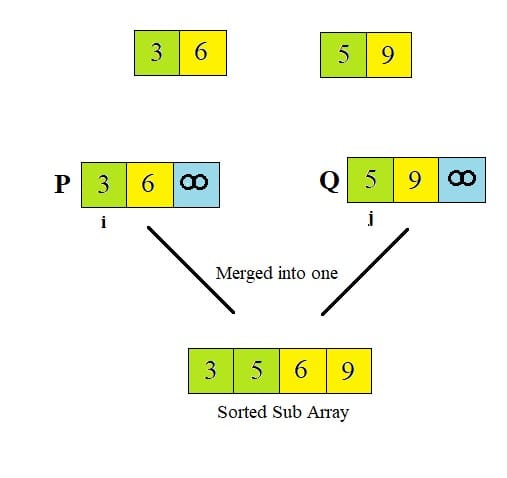 As we can see the P and Q with the infinity at the end, in next step we compare each element of P and Q to get the sorted sub array, like 3 is compared with 5 as 3 is smaller it is placed first, then index i is increased and 6 and 5 is compared as 5 is smaller so 5 is placed after 3 in sorted subarray.

Now j is increased and if we compare 6 and 9, 6 is smaller than 9 that is why it is placed after 5 in sorted subarray and when i is increased now it points to infinity and now when 9 is compared with infinity we can understand 9 is smaller than infinity and it will take last place. In this process we can also understand what is the significance of infinity here in this algorithm. This is how the Merge function works. 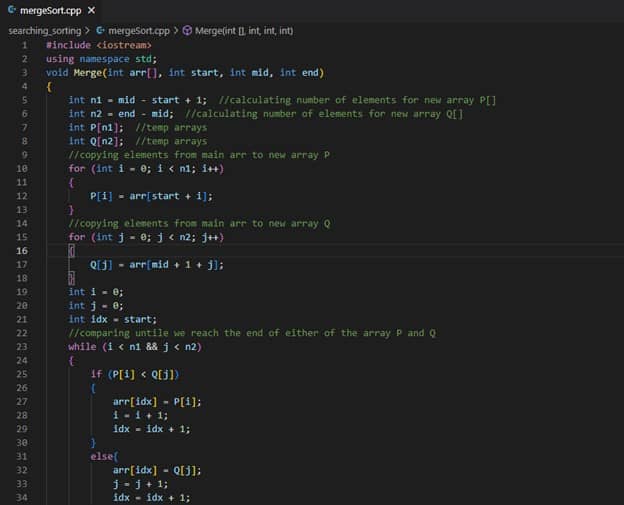 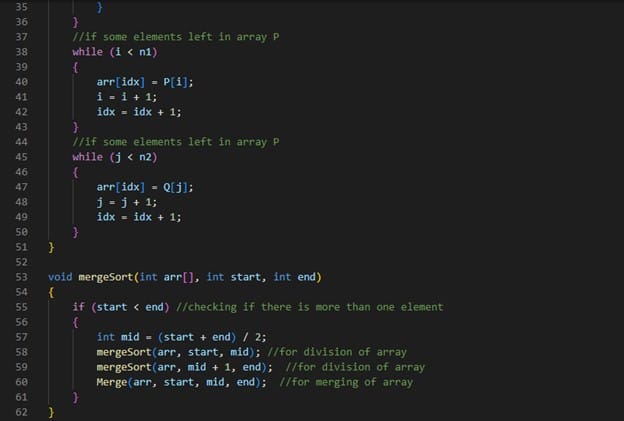 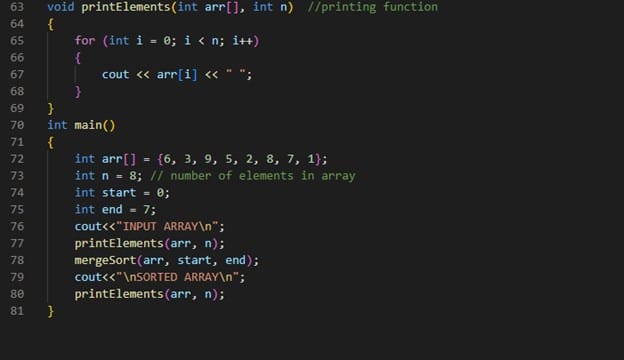 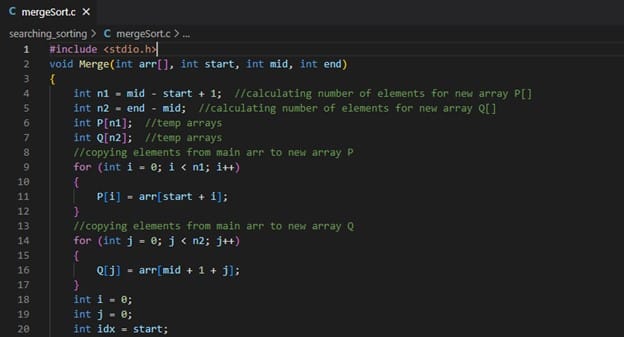 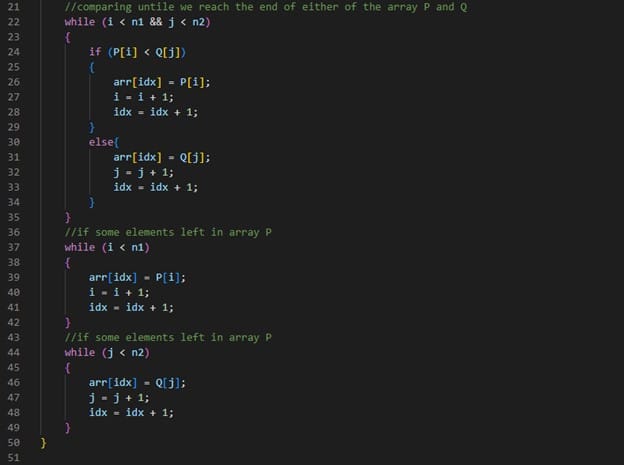 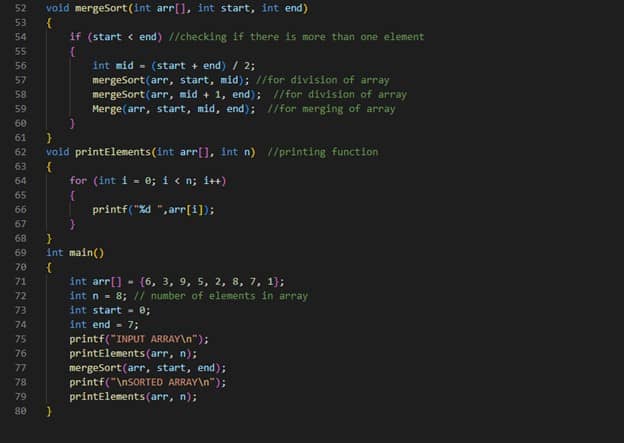 As we can see we keep dividing the array into two parts until the array contains only one element. This division of the array takes O(logn) time and the merge function takes O(n) time because it takes linear time to merge two array. The recurrence relation of Merge sort Algorithm is :-

So the total time which Merge Sort Algorithm takes is O(n*logn). The complexity remains the same in all cases.