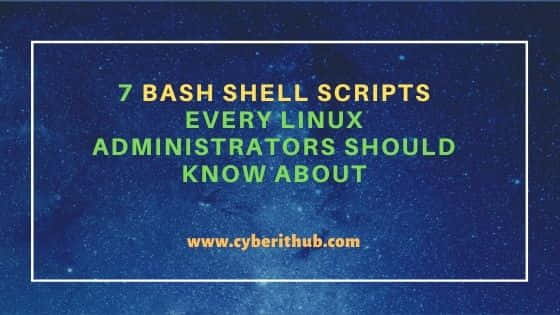 In this article, I will take you through 7 Important Bash shell scripts that every Linux Administrators Should Know About. In a typical scenario, every Linux administrator runs certain set of repetitive commands as part of their day to day task. Sometimes running command manually can be boring and frustrating so to deal with this situation it is always recommended to use bash shell scripts wherever possible to accomplish the job. We will go through some of the most basic bash shell scripting which can be easily understood by beginners as well.

7 Bash Shell Scripts Every Linux Administrators Should Know About

Also Read: How to Set/Assign output of a Linux Command to a Variable

Script #1: How to check if interfaces on server are present using shell script

There are multiple ways to find out the existing interfaces on a server. Below are the 2 ways to do it.

Here we are using ip link command with if else statement to check if a specific interface is available on a Server.

Another useful utility that we can think of using is ethtool. We can use for loop to go through multiple interface and check if it available. More about ethtool command.

Script #2: How to check if a server is reachable or not

One of the very common error that all Linux administrator encounter is checking the server unreachable issue. For this, the first or initial check is to always use the ping command(if ICMP is enabled) to verify the Server reachability. This can be easily done through script as shown below.

Script #3: How to SSH to a remote server using shell script

Script #5: How to read a file and print on console or redirect to standard output

Script #6: How to extract file name and file extension from a given file using shell script

Renaming files are another occasional task that we always perform. This can also be done through a bash shell script. To demonstrate, we have created two files in current directory car.jpg and bike.jpg. It will get renamed using below script.

a) To stop a network interface

b) To start a network interface

c) To check if a network interface exist

If you have a script file.sh that you want to execute in debug mode, then you can either execute like ./file.sh -x as shown below.