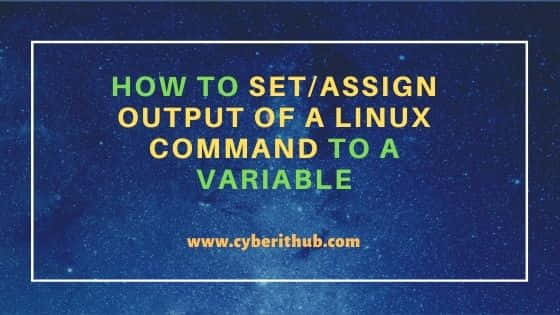 In this article, I will go through different methods using which you can set/assign output of a Linux Command to a variable. If you are frequently using Bash Scripting then you might know or aware of the methods used to set/assign output of a Linux command to a variable but in case you are not then don't be afraid, we will see all the methods in great detail with examples in below section. But before that we need to understand what is variable in Linux ? Well, the definition of variable in Linux is not very different from what you already know from other Scripting or programming Languages.

In Linux also, variable is a string which is used temporarily store some values. The value assigned could be a number, text, filename, device, or any other type of data. But the way variables are used in Linux are little different from what you already know from other programming languages. In Linux, variables are broadly divided into two types - System defined variables and User defined variables.

The other set of variables are known as User defined variables which are managed and maintained by the User itself. In this types of variables, generally you don't need to define the data type of a variable and you also don't need to declare it before hand. These type of variables are mostly locally used and can be accessed only from within the terminal session you are currently working on. You can check more about variable assignment on Advanced Bash-Scripting Guide web page.

You can also verify the output of variable by running the command manually and see if it shows the correct value.

This method is also not very much different from the previous one. It is just that instead of dollar and parenthesis you need to use single quote(` `) operator to store the command value to a variable. To show an example, we are using the previous command date +%s under single quote and then assigning this to a variable called var using var=`date +%s` command. Then displaying the value stored in the variable using echo $var command as shown below.

Like previous method, you can also verify here if the variable is showing correct value by running the command manually.

How to Install jq(JSON Processor) on RHEL/CentOS 7/8