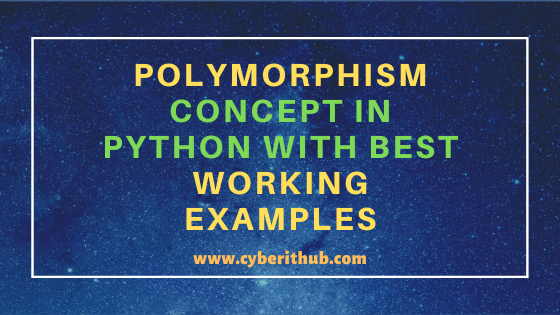 Polymorphism is one of OOPS concept which allows the inherited class to define/redefine the functions/methods that has the same name in base class.

Method overloading and Method overriding are two types of polymorphism which proofs the concept. We will see both of them one by one below.

Method Overloading in python is defined as functions having same name identified by types of argument and number of arguments passed.

Unlike any other programming languages (like C++), it's implementation is different. Analyze below program. it will fail in python, however same will execute successfully in C++ (Make syntax changes if executing in C++)

Now, try below ways to achieve Method overloading in python.

In this example we are defining a method add() which take data type and different number of data as an argument. Then we are using a for loop to go through each of the data and sum of those values. Finally add() method will display those values on the output. Here we are calling add() method 3 times and each time with different data type and different number of arguments proving the concept of method overloading.

In this example also we are defining add() method which takes different types of data and different number of arguments but this time we are using a Class Operation and calling add() method by creating object of this class.

In Method Overriding, name of the function/method as well as parameters passed to that function are same in parent and child classes. So basically method overriding means having two methods with the same name but performs different tasks.

It comes handier when implementing Inheritance in python. As you might be aware that in Inheritance, child class inherits the methods of Parent class but sometimes one cannot use the inherited methods as it is in child class. We need to modify the implementation of the method before use. This concept is Known as Method Overriding. It is used for reusability purpose, hence reduces the memory usage while processing.

In this example we have a method fruit() in Class Fruits which is getting overridden in another Class called Mango by showing different statement on the output as you can see in below python program.

Like above example, here we have a method car() defined in Class Car which subsequently getting overridden in another Class Nissan by showing different statement on the output. This proves the concept of Method Overriding.

How to Check Stateful and Stateless Pods in Kubernetes Cluster