In this tutorial, I will take you through the understanding of different C# Data Types. As C# is an object-oriented language, and at the basic level it contains building blocks known as classes. The classes interact with one another, and as a result, provide functionality at runtime. A class consists of two components:

Methods: Methods indicate the different operations that are to be executed in the class object. 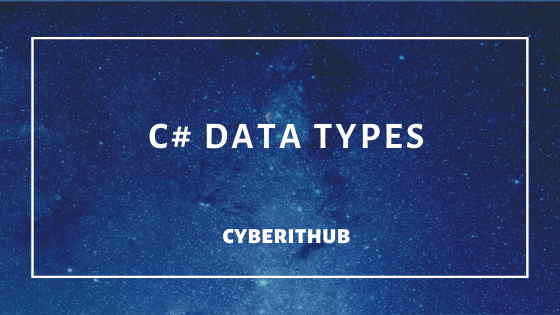 In C#, a variable can acquire one of the following types:

There are other pointer types that allow us to access value in the memory location of a variable. As we go more on Creating and Using C# data types, we will explore those C# data types in detail. For now, let's look at these two C# data types and explore them in detail.

In value types, the variables contain the data or the contents of the variable. This implies that if any change is made to a value type variable in a different scope of the program, the change will not be reflected back once the control shifts to the calling function.The following are the different types of value types in C#.

Following is the list of simple C# data types:

Long: Unlike Int, which is 32-bit, Long is a 64-bit integer value. It can also be both signed and unsigned.

Char: Represents a single character sequence. It can acquire values such as C, c, or white-space, any special characters – such as % and # – and even a digit such as 1.

bool: It can be used to represent variables that acquire a digital value such as true or false.

For the preceding declaration, the enumerators will acquire the following values:

Just like classes, structs in C# can be used to group together related data. Like classes, they can have constructors, fields, and methods. However, there are some differences between the implementation of structs and classes.

The following are the reference types available in C#:

Class: A class represents a collection of related properties and methods.

Interface: An interface in C# represents a collection of related properties, events, and methods, with just a declaration and no definition. In this chapter, in upcoming sections, we will deep dive into interfaces and see how they are implemented in C#.

Dynamic: A dynamic type variable avoids compile-time type checking. For example, if we declare a dynamics variable type and assign a variable to it, its type is defined at runtime when a value is assigned to it.

For example, in the following code snippet, we are creating a dynamics type variable, assigning different variables to it and evaluating its type at runtime:

String: A String object is a sequence of Char objects whose value is immutable or read-only. This basically implies that, when we modify a variable of type String, it creates a new object in memory.