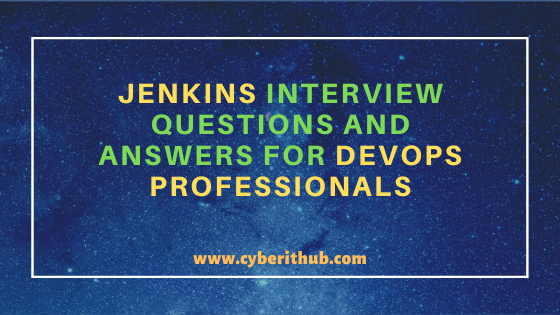 1. What are different types of Pipeline in Jenkins ?

Ans. There are two different types of Pipeline in Jenkins:-

2. What is the difference between Declarative Pipeline and Scripted Pipeline ?

3. What is the  difference between Github and Bitbucket ?

Ans. Github is basically focused around open community based projects whereas bitbucket is for private entity and organizations.

4. What is Pipeline in Jenkins ?

Ans. A pipeline is a set of Job in sequence to perform some specific Task. More on Jenkins Pipeline.

5. How to Integrate Jenkins with AWS Codepipeline ?

6. By Default, does a shell gets assigned for jenkins user after Jenkins Installation ?

7. By default, which User runs Jenkins ?

8. What is the default Jenkins home directory in Linux ?

9. What is default Jenkins Port on which it listens to ?

10. From which file in Linux you can copy the administrator password for the first time login ?

11. Which tomcat file we need to edit to change the path of Jenkins to some other location ?

12. How to Change the path of Jenkins from Tomcat context.xml file ?

13. What is the default location of tomcat context.xml file ?

14. Which configuration file in Jenkins can be used to change the location of Jenkins ?

15. How to Change the Jenkins Home directory from /etc/sysconfig/jenkins file in Linux ?

16. How to Install Jenkins through docker ?

Ans. Jenkins can be installed using docker in a two step process:-

17. From which version manual Jenkins setup wizard is added ?

Ans. It is added from Jenkins version 2.

18. What is the latest Jenkins version ?

19. How to disable Jenkins setup wizard from /etc/sysconfig/jenkins file ?

Ans. Add -Djenkins.install.runSetupWizard=false under double inverted comma in below Line.

20. What is primary use of SonarQube ?

Ans. SonarQube is used to monitor the quality of code. It will look for Code Smells, Bugs and Vulnerabilities and suggest the fix for the same.

21. How to Install SonarQube in Linux using console mode ?

Ans. We need to run below Script from Installation directory to install it in console mode.

22. What is the name of default embedded SonarQube database which is used for testing purposes only ?

23. What is the default SonarQube Port which it listens to ?

24. What is the default User name and password of SonarQube ?

Ans. User is "admin" and password is also "admin".

25. What is the command to run a SonarQube Scanner for Maven ?

26. How to Run SonarQube Using Maven ?

Ans. POM is known as Project Object Model. It is a fundamental unit of work in Maven. It is represented as pom.xml file which usually contains project configuration and other related information.

28. Which Plugin is required to Integrate SonarQube with Jenkins ?

29. Which Plugin needs to be installed to provide SSH credentials to build via ssh-agent in Jenkins ?

30. What are the different options we need to set in Jenkins to create a Job ?

Ans. Below options needs to be set to create a Jenkins Job:-

31. How to trigger a Jenkins Job automatically after performing some code change in GITHub Repository ?