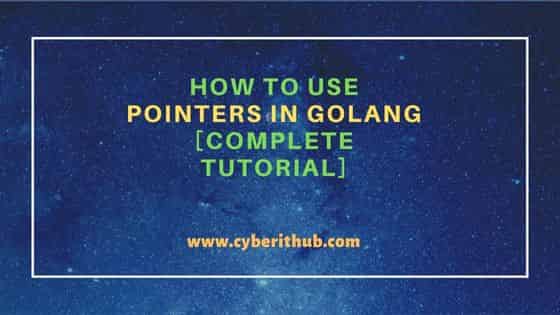 In the previous tutorial, we have seen how to work with arrays in Golang. In this tutorial, we will see how to use pointers in Golang. In programming, a pointer is referred to as a special variable which stores the memory address of other variables. In this article, we will explore pointers in Go and its application to solving problems. We will also look at some of the problems that could occur when working with pointers and how to mitigate them.

How to Use Pointers in Golang [Complete Tutorial]

Also Read: How to Work with Arrays in Golang [Complete Tutorial]

In Go, pointers are mostly applied when trying to update the value of a variable from within a function. Before we dive deep into explaining pointers, let's briefly explain functions in Go.

In the picture above, we declared a function to print "Hello World!". We can call the function within main using function_name() as demonstrated below:-

The main function is the default execution function in Go, and directs where the compiler should start reading code from. It cannot be declared and reused in any other part of code like other functions.

A function can also be declared to take in one or more parameters and return values of specific data-types. They are called by passing its argument within the parenthesis and assigning the result to a variable. The example below is a function which takes two numbers and returns their sum.

Please note that all the code samples used in this article were run on a 64-bit Ubuntu 20.04 Linux environment.

In Go, a pointer is declared like a variable but with the asterisk (*) character before its data type in the form *T where T is that data type of the variable the pointer will point to. The asterisk character (*) is called a dereferencing operator in Go. It is used to denote a pointer type. The example below creates a pointer p which can store the address of an integer.

The built-in function new() takes a data type, allocates some memory equivalent to that type and stores its zero value, then returns its memory address. It is a way of declaring a pointer type without first declaring a variable. Therefore, you have access to read or update that variable through only the pointer.

When passing a variable to a function, a copy of that variable is declared in memory and passed to the function. Therefore, the function cannot make a change to the variable which was passed in as demonstrated below. This is called passing by value.

In some practical cases, you will need to update a variable using a function. We can easily fix the code above to update the value of a from foo() by defining foo() to receive a pointer to int (*int) instead of an int, and passing a pointer to a into foo().  We then dereference a within foo() and change its initially stored value. This is called pass by reference.

A practical example of where we could apply pass by reference and value is in a banking application. After making a withdrawal, a call to a withdraw function should accept a pointer to a variable storing the account balance of a user so it updates it to store the new balance. The price to be withdrawn can be passed by value since it does not change within the withdraw function.

It is advised to take a pause when programming to determine if a pointer is necessary in a particular case or now. Misusing pointers can lead to changing memory values unnecessarily, or a panic when mistakenly dereferencing an uninitialized pointer. Aggregate data types like structs and arrays also have pointers which are applied when trying to change the value of its fields or index values respectively. When doing advanced programming, using pointers is inevitable because a lot of standard package functions in Go accept or return pointers.