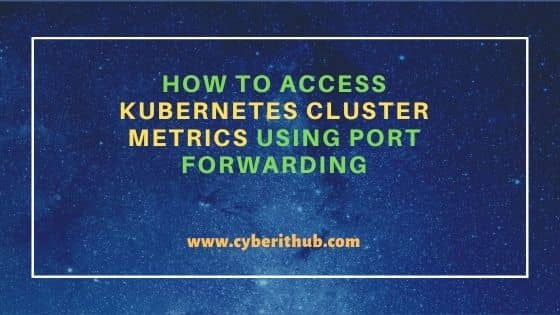 In this article, I will show you how to access Kubernetes Cluster Metrics using Port Forwarding. If you want to directly communicate from your local system to a given port on a Pod then Port Forwarding is the best method to use here. Kubernetes support this feature through kubectl utility. It is important to note here that this feature is also available for Kubernetes deployment, replicaset and service. Port forwarding does not start by default. One has to manually start and stop it.

What is Port Forwarding

It is Port mapping technique in which requests from the outside world can be mapped to an internal port of a private network resource which is not otherwise accessible over the public network.

If you want to access pods and services which are not exposed to the external world, then Port forwarding technique can be used to route the traffic from the localhost port to access those services.

Next step is to check all the pods running in the current context by using kubectl get pods command as shown below. For the demo purpose, here we are going to access the metrics of one of our running pod called test-app-consumer-b89c48763d-5khg7 using port forwarding technique.

To enable the Port Forwarding, you need to use below kubectl port-forward command. This will forward all the requests or connections going to your localhost Port 8081 to Pod test-app-consumer-b89c48763d-5khg7 on Port 8081. Here you just need to make sure the local port you are sending requests to must be free and available to use.

which is the same as

Once the forwarding is enabled, you can now open your favorite web browser in your local System and access the Cluster metrics by accessing URL http://localhost:8081. To stop the forwarding, you can just Press Ctrl+C.