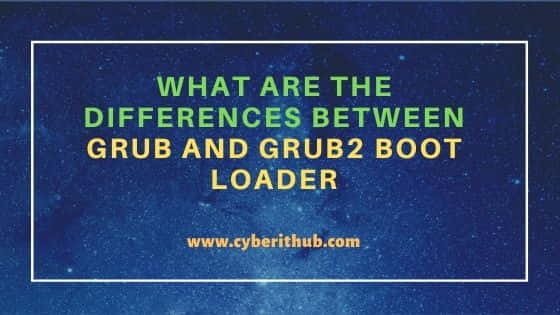 In this article, we will look into the difference between legacy GRUB and GRUB2 Boot Loader but before that let me ask you a quick question - Do you know what was the main problem with the legacy GRUB Bootloader which later resulted the creation of GRUB2 ? Well, there were many problems in the original GRUB but the main problem was it has becoming incredibly difficult to maintain due to messy code and multiple System Failures. It has been extended many times beyond the original scope due to multiple feature requests till it reached to a point where it cannot be extended any further.

So the need of the hour was to rethink and redesign the whole framework which ultimately resulted in the creation of GRUB2. So, in terms of design both are actually very different. We will see all the important differences between them in below section. More about GRUB Bootloader.