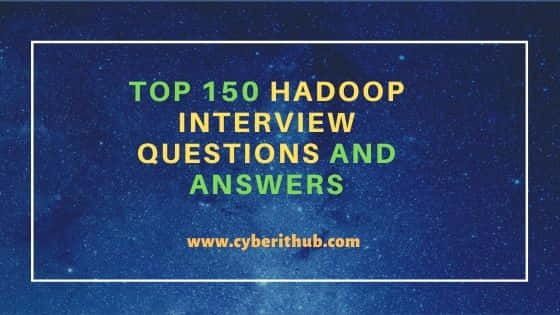 In this article, CyberITHub offers you top 150 Big data Hadoop interview questions and answers. With the onset of this Digital World, one of the biggest challenges we face today is about storing and handling huge volume of complex data. This resulted in the rise of Big Data Platform in which Hadoop is the most common and popular one. Organization dealing with huge chunks of data always looking for Hadoop Skillset Professionals. Hence CyberITHub is going to provide you the best interview questions that will help you crack Big Data and Hadoop based Job Interviews.

Ans. Apache Hadoop is an open source framework which are used to store, process and analyze huge volume of data.

Ans. Big Data is a separate field which deals with storage and processing of large volume of data sets in complex Data Clusters.

3. What are the two different types of nodes in HDFS ?

4. What is the main role of NameNode ?

Ans. NameNode manages all the metadata needed to store and retrieve the actual data from the DataNodes.

5. What is the purpose of SecondaryNameNode ?

Ans. The purpose of the SecondaryNameNode is to perform periodic checkpoints that evaluate the status of the NameNode.

6. What is the usual default size of HDFS block ?

7. Which command can be used to bring HDFS into safe mode for maintenance ?

Ans. It is a kind of file in which the NameNode stores the metadata of the HDFS File System.

9. What are the different features offered by the HDFS Snapshots ?

Ans. Following are the features offered by the HDFS Snapshots:-

11. Which command can be used to get an HDFS Status report ?

12. Which command can be used to take HDFS Snapshots ?

Ans. TestDFSIO is an HDFS benchmark application. It is basically a read and write test for HDFS.

14. What is Speculative Execution ?

Ans. If there is any slow running tasks, then Hadoop never tries to fix them. Instead it will diagnose and runs a backup task for them. This is Called Speculative Execution.

15. From which file Speculative Execution can be switched on or off ?

Ans. MapReduce is a Hadoop framework on which applications are written to process huge volume of data in large data clusters.

Ans. Pipes is a library that allows C++ source code to be used for mapper and reducer code.

Ans. Pig is a high level platform which provides an abstraction over MapReduce.

19. How to start Pig so that it can use Hadoop MapReduce ?

21. What are the different features offered by Hive ?

Ans. Below features are currently offered by the Hive :-

22. Can a programmer add their custom mappers and reducers to Hive queries ?

Ans. Apache Flume is an independent agent designed to collect, transport, and store data into HDFS.

24. What are the different components Flume Agent composed of ?

25. Can a source of a flume agent write to multiple channels ?

26. Can a sink of a flume agent take data from multiple channels ?

Ans. No, it can take data from only one channel.

27. Which of the data transfer format is usually used by the Flume ?

28. What are the advantages of using Apache Avro data transfer format ?

30. How many types of Oozie jobs are permitted in Hadoop ?

Ans. Three types of Oozie jobs are permitted in Hadoop :-

31. In which language Oozie workflow definitions are written ?

32. What are the different features provided by Apache HBase ?

Ans. Below are the features provided by the Apache HBase:-

34. Which utility can be used to load data in tab-separated values(tsv) format into HBase ?

35. Which application can be used to import and export RDBMS data into HDFS ?

36. Which application can be used to capture and transport weblog data ?

37. What is the command to run the balancer ?

38. When does HDFS goes into safe mode ?

Ans. When a major issues arises within the file system then HDFS goes into safe mode..

40. Which property provides the time in seconds between the SecondaryNameNode checkpoints ?

41. Which command can be used to force the checkpoint if the SecondaryNameNode is not running ?

42. How many simultaneous snapshots can be accommodated in a snapshottable directory ?

43. In which directory snapshots can be taken ?

Ans. Snapshots can be taken on any directory once the directory has been set as snapshottable.

44. Which is the default Scheduler for YARN ?

45. What are the different capabilities NFSv3 gateway supports ?

Ans. Below are the capabilities NFSv3 gateway currently supports:-

Ans. DistributedCache is a facility provided by the Map-Reduce framework to cache files (text, archives, jars etc.) needed by applications.

47. What are main configuration files in Hadoop ?

Ans. Below are the main configuration files in Hadoop:-

48. How to run YARN WebProxy in standalone mode ?

49. What is the role of JobHistoryServer ?

Ans. The JobHistoryServer provides all YARN MapReduce applications with a central location in which to aggregate completed jobs for historical reference and debugging.

50. In which configuration file the settings for the JobHistoryServer can be found ?

51. How YARN controls the container's memory ?

52. Which command can be used to check the health of HDFS ?

53. How to enable Application Master restart when an error occurs in MapReduce Job ?

Ans. To enable Application Master restart, you need to set the following properties:-

Ans. Blocks define the minimum amount of data that HDFS can read and write at a time.

56. What are the different types of communication protocol in HDFS ?

Ans. There are three different communication protocols in HDFS :-

57. What are the different operations performed by the QJM when it writes to the JournalNode ?

Ans. Below operations are performed by the QJM when it writes to the JournalNode:-

58. What is Quorum Journal Manager(QJM) ?

Ans. The QJM is a dedicated HDFS implementation, designed for the sole purpose of providing a highly available edit log, and is the recommended choice for most HDFS installations.

59. Which command can be used to fetch the latest fsimage from NameNode ?

60. Which tool is used to convert fsimage file content into a human-readable format ?

Ans. HDFS Federation is a feature introduced in Hadoop 2, allows a cluster to scale by adding namenodes, each of which manages a portion of the filesystem namespace.

Ans. Checkpoint is the process of merging an fsimage with edit logs by applying all the actions of the edit log on the fsimage.

64. What is failover controller ?

Ans. It is an entity in the system which does the transition from the active namenode to the standby.

65. What is graceful failover ?

Ans. When failover manually initiated by an administrator in case of a routine maintenance then it is called graceful failover.

66. Which fencing technique is being used as a last resort to fence the previously active namenode ?

Ans. STONITH(shoot the other node in the head)