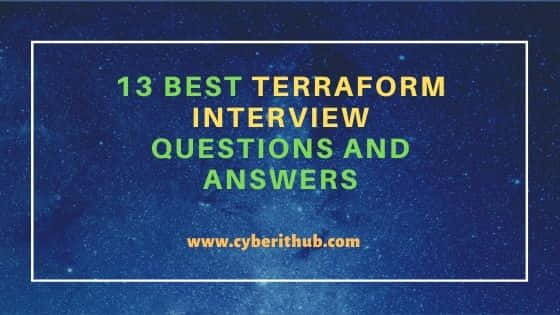 In this article, i will take you through 13 Best Terraform Interview Questions and Answers. Terraform is an open-source infrastructure as code software tool created by HashiCorp. It enables users to define and provision a datacenter infrastructure using a high-level configuration language known as Hashicorp Configuration Language, or optionally JSON.

Below are the few Best terraform interview questions that usually get asked in DevOps Interview.

Ans. Terraform is an open source tool for securely and efficiently provisioning and managing cloud infrastructure. It is a highly reliable tool that supports multiple infrastructure through providers. You can always use Terraform to create, modify, or delete multiple resources, such as ECS, VPC, RDS, and SLB.

It writes the infrastructure, for ex: virtual machines, storage accounts, and network interfaces in the configuration file that describes the cloud resource topology. The CLI of Terraform provides a simple mechanism, which is used for deploying and versioning configuration files on AWS Cloud or any other supported cloud.

Ans. IaC is known as “Infrastructure as Code”. It refers to a system through which developers can maintain and provision the computer data centers automatically instead of getting into a manual process. Terraform, for instance, is an example tool of IaC.

Ans. These zones are situated within an area and each zone has its separate source of power and network. Any region where availability zone is enabled has at least three such availability zones. The AzureRM Terraform provider have no resource accessible to manage the Azure Availability Zones at present.

4. Can terraform be used for on-prem infrastructure ?

Ans. Yes, Terraform can be used for an on-prem infrastructure. There are many providers which are available that can be chosen as per your requirement. Many also build customer terraform providers for themselves, all needed is just an API.

5. On Azure, Can callbacks be used with terraforming ?

Ans.Yes, callbacks can be used on Azure with terraforming with the help of the Azure Event Hubs. The AzureRM provider of Terraform is today making this functionality easily available. Now the terraform actually comes already pre-installed itself in the portal of Azure Cloud Shell of Microsoft.

6. Can the Terraform Module Versions be locked anyhow ?

Ans.Yes, there is a way to lock it. if terraform module registry is being used as a source, then the 'version' attribute can be used in the module in a configuration file of Terraform. If as a source, a repository of Github is being used then in the query string, branch, and versions to be specified by'? ref '.

7. Mention the version controls that are supported besides GitHub ?

Ans. This is simple terraform interview questions yet should be taken into note significantly. GitLab CE and GitLab EE are supported. Bucket cloud is also supported.

8. Give a configuration of for creating a single E2C instance in Amazon Web Services ( AWS ).

9. Are themes supported by terraforming ?

Ans. Yes. Gtk themes are efficiently supported by the 0.3.1 version of terraforming. If your system contains a gtk theme, then it can be enabled by performing this:

If it shows error on opening the theme files and theme files fail to open, then .gtkrc should be edited and after that attach a line like the below one at the starting of the file.

Now the theme should be able to load on startup.

10. What are the features of Terraform ?

Ans. This is very important for Terraform Interview Questions. Main features include:-

11. Can you shortly explain the best practices for cloning an infrastructure with Terraform ?

Ans. If you're referring to promotion, you could have dev and prod branches of a repository with Terraform code and then point dev and prod workspaces against those branches and promote changes from dev to prod to clone, but set different values of Terraform variables to account for differences between dev and prod. If by "clone" you mean bring existing infrastructure not provisioned by Terraform under Terraform management, see the below questions about to terraform import. If you just want to duplicating an existing infrastructure with Terraform, you would need to map all of your existing resources into a Terraform template.

12. If I was interested in the on-prem Terraform product, how could I use Sentinel as well? Is it a separately licensed module of the Terraform server ?

Ans. Absolutely. Sentinel is available with Terraform Enterprise Premium for both the SaaS and Private versions. There is no separate charge for Sentinel. It is not licensed separately.

13. Is there a way to bulk import the state of current cloud subscription into Terraform state ?

Ans. You can use the terraform import command to import individual resources into your Terraform state, but there is not currently a bulk import tool.