In this article, we will talk about the error Running scripts is disabled on this system.

PowerShell is a task automation and configuration management framework from Microsoft, consisting of a command-line shell and associated scripting language.

Also Check: How to install OpenJDK in CentOS 7

PowerShell's execution policy is a safety feature that controls the conditions under which PowerShell loads configuration files and runs scripts. This feature helps prevent the execution of malicious scripts.

This error "Running scripts is disabled on this system" comes when the PowerShell execution policy doesn’t allow us to run scripts.

On a Windows computer you can set an execution policy for the local computer, for the current user, or for a particular session. You can also use a Group Policy setting to set execution policies for computers and users.

Execution policies for the local computer and current user are stored in the registry. You don't need to set execution policies in your PowerShell profile. The execution policy for a particular session is stored only in memory and is lost when the session is closed. Let's try to understand further about this error "Running scripts is disabled on this system".

The execution policy isn't a security system that restricts user actions. For example, users can easily bypass a policy by typing the script contents at the command line when they cannot run a script. Instead, the execution policy helps users to set basic rules and prevents them from violating them unintentionally. 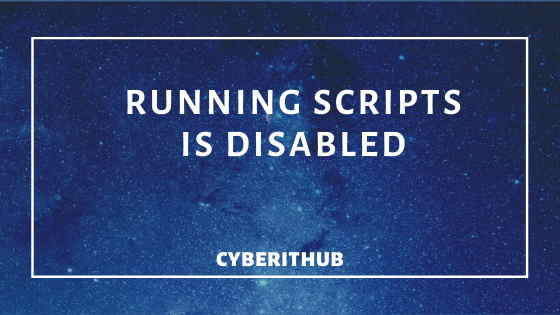 There are certain scenarios in which you can follow the steps, verify that Execution Policy is set correctly, and still have your scripts fail.

If this happens to you, you are probably on a 64-bit machine with both 32-bit and 64-bit versions of PowerShell, and the failure is happening on the version that doesn't have Execution Policy set. The setting does not apply to both versions, so you have to explicitly set it twice.

Please make sure to start the Powershell with the administrative access before running below steps.

"Running Scripts is disabled on this System"

Step 1: Check the Version of Powershell

Check the version of powershell before changing the execution policy:-

After enabling the execution policy, check once the status.

For more info on Powershell, Go to: Powershell 5.1