In this article, I will take you through 15 Best Examples of locate command in Linux (RedHat/CentOS 7/8). locate is a very useful command in Linux to search a file in almost no time. It is traditionally faster in comparison to other searching tools like find command in Linux due to its separate maintenance of a database to keep the records of all file paths and location.

Difference between locate and Find command 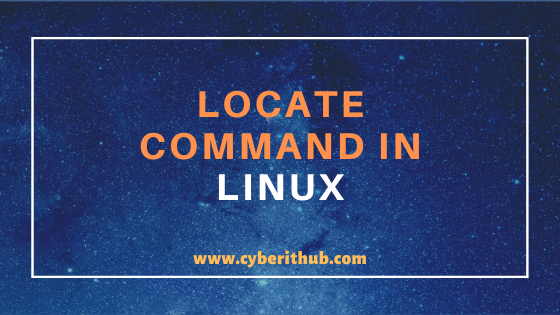 -V : Write information about the version and license of locate on standard output and exit successfully.

-c : Instead of writing file names on standard output, write the number of matching entries only.

If instead of giving complete file name if you use wild card character(*) to count the occurrence of all the files ending with .txt then you need to use below locate command in Linux.

If you want to limit the number of search output during from locate run then you can do it by using -n option and passing the number of total search as an argument to locate command as shown below.

If you want to ignore the case sensitivity then you need to use -i option with locate command in Linux. As shown in the below demonstration, we are trying to search a file File.txt using locate -i File.txt command. It will ignore the Case sensitive F and search all the files matches with file.txt in the System.

-S : Write statistics about each read database to standard output instead of searching for files and exit successfully.

If you want to search any file using regular expressions then you can search it by using -r option with locate command in Linux as shown below. As shown in the below example, here we are trying to search all the matches with file keyword at the end($).

-r : Search for a basic regexp.

If you want to display the output of searches in one line then you need to use -0 option with -i option as shown below. As you can see from below demonstration, output of locate -i -0 file.txt command is showing in one line.

Sometimes you can exploit the locate database property to find the location of some deleted files. Let's say you have a file.txt which you deleted but forgot to run updatedb command to update the locate database about the deletion. Then later on if you want to check the Original location of file from where it got deleted then you can run same locate file.txt command and find the location.

This command might be helpful sometimes if you want to find the location of deleted files. In below example I have first run locate command to check the location of file.txt.

Then i removed the file.txt from /root path and did not ran updatedb command to update the database about the changes done.

When again run the same locate command you can see that location of file.txt is still showing under /root path.

If you want to check a file which exists or not during locate command run then you need to check it through locate -e file.txt command where it will check for file.txt availability in the System.

-e : Print only entries that refer to files existing at the time locate is run.

Example 13: Block search in some of the directories

If you want locate command to not to look into some directories while running a search then you can add the path of that directory under /etc/updatedb.conf and block the search as shown below. Here you need to add the directory path in PRUNEPATHS and then save and exit the file. Then run the updatedb command once to update the changes and we are done.

If you want to find the location of which command and if you have some idea from which path you basically want the output then it will be easy to grep the which command path from its parent directory. In this example, we know that all system tools will be available under bin or sbin so we will search which command path under bin directory and will get our output.

Please note that in above example if you do not search it under bin path then direct search using locate command in Linux will give you a long list of all the path where which command will be available.

If you want to check all the options that can be used be locate command then you can check it through --help as shown below.

12 Best Examples of tail command in Linux for Beginners

12 Most Popular rm command in Linux with Examples