In this tutorial, I will take you through Step by Step procedure to add user to sudoers on Ubuntu 18.04. In many cases you might have seen that a non-privileged user has been given sudo access to perform root actions. This is required in many Organization where some tasks cannot be performed without having root access. In those cases usually Linux Admin or System Admin provides sudo access to non privileged user to perform root operations as they cannot provide root user access. 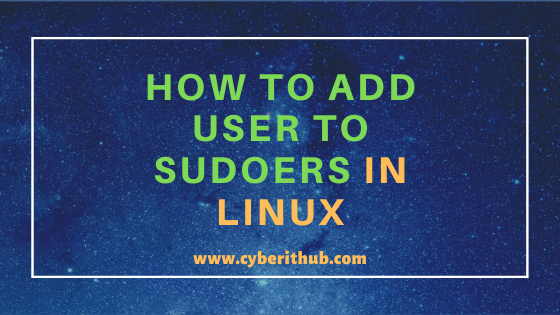 How to Add User to Sudoers

Also Read: How to Change Date/Time in RedHat/CentOS 7

First we need to create an user which can be given sudo access to perform administrative tasks. We will create a user test for our example. This needs to be done either through root user or any other user having sudo access. Here I am using root user to create test user.

-m: Create the user's home directory if it does not exist. The files and directories contained in the skeleton directory (which can be defined with the -k option) will be copied to the home directory. More on useradd Man Page.

By default, if this option is not specified and CREATE_HOME is not enabled, no home directories are created.

test: Name of the User

/bin/bash: Shell assigned to the User

Now you need to add user to the sudo group using usermod command.

-a: Add the user to the supplementary group(s). Use only with the -G option. More on usermod Man page.

-G: A list of supplementary groups which the user is also a member of. Each group is separated from the next by a comma, with no intervening whitespace. The groups are subject to the same restrictions as the group given with the -g option. More on usermod Man page.

If the user is currently a member of a group which is not listed, the user will be removed from the group. This behaviour can be changed via the -a option, which appends the user to the current supplementary group list.

Now switch to test user and verify if the user is added into the sudo group by running whoami command.

In most of the cases adding user to the sudo group does the job but it is better to add the user in /etc/sudoers file in case it did not work like below:-

Please note that you need to open /etc/sudoers file using visudo command to make sure there is no configuration error in the file.

Now you can try running some command which requires sudo access and check if the sudo access is working or not.

User is not in the Sudoers File

Sometimes you might see an error user is not in the sudoers file. To resolve this error, you need to check in the /etc/sudoers file if the User is added or not.

How to Install Ruby on Ubuntu 18.04 with Easy Steps

33 Practical Examples of ulimit command in Linux/Unix for Professionals

How to Add User to Sudoers in Ubuntu