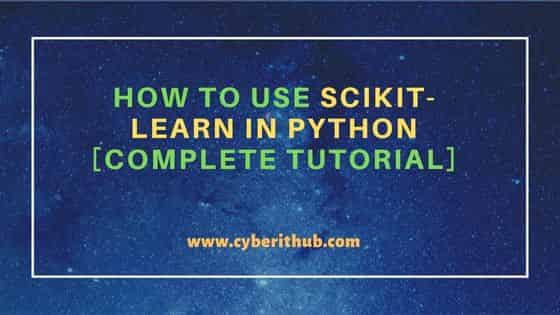 In this tutorial, we will focus on Scikit-Learn library usage in Python. Scikit-Learn is simple, fast and useful library used in python machine learning. It provides simple and efficient tools used in data analysis and data mining. Its free, easy to use and accessible to everyone. It is reusable in several contexts. Its built on Numpy, Scipy and matplotlib. Its open source library provided by Google and commercially usable.  Scikit-Learn which is also known as sklearn can be used in statistical modeling like classification, regression and clustering etc. It includes many tuning parameters.

How to use Scikit-Learn in Python [Complete Tutorial]

The target audience of sklearn library are those persons who have keen interest in machine learning python. To understand python sklearn in-depth, one should have basic knowledge of python machine learning.

To use sklearn in your program, you need to import it using Import sklearn as shown below.

If we need to import model from scikit-learn, we are suppose to follow some basic steps starting with dataset loading. Dataset consist of two components:-

Let’s load a simple dataset named Iris. Let’s see how to load the dataset using scikit-learn. It can be imported by using simple command:-

After importing, we will load our specific dataset to use in our Jupyter Notebook.

To confirm if data is loaded, print shape of data:-

If we want print details of iris dataset , we can acquire it by using:-

As seen in the example above, it uses train_test_split() function of scikit-learn to split the dataset. This function has the following arguments:-

Now we can use multiple examples to drive different insights or results from data by using sklearn. In this article, we will see three models:-

Let’s understand first, what exactly k-nearest neighbor is ? k-nearest neighbor is also known as Knn. In laymen's terms, KNN is a non-parametric classification technique. It is one of the most well-known classification methods. The idea is that predetermined features establish a space in which known data are ordered. The algorithm will decide the class of the new data when it receives new data by comparing the classes of the k nearest data.

Large-scale data mining projects have adopted the machine-learning standard K-Nearest Neighbors (KNN) approach. The concept is to employ a lot of training data, with each data point having a unique set of factors. Each point is conceptually displayed in a high-dimensional space, where each axis represents a distinct variable.

The dataset is divided into ‘k’ clusters and each observation is assigned to a cluster. This is done iteratively until the clusters converge. Working with implementation explained below:-

a) First of all we will import knn in our notebook.

b) Then we will fit model named knn.

c) Then we will predict and print the result.

d) To compute accuracy, we will import the metrics in our notebook.

e) And then lastly we need to perform accuracy computation as shown below.

f) Accuracy that we achieve here is 97%

We need to transform the large volume of raw data we are working with into relevant data before feeding it into machine learning algorithms. Preprocessing the data is the name of this procedure. Preprocessing is a package in Scikit-Learn that can be used for this purpose. We will discuss multiple preprocessing techniques using sklearn.

It is used to reduce mean from feature vector so that every feature centered on zero.

a) Starting with importing preprocessing module in our notebook :-

c) Displaying the mean and the standard deviation of the input data:-

d) Removing the mean and the standard deviation of the input data:-

This preprocessing technique is used for scaling the feature vectors. It is important because the features should not be synthetically large or small.

Let’s learn the basics mathematics of the well-known k-means clustering technique and how scikit-learn can be used to implement it. Clustering is simply gathering things that are similar to each other in one group more than other groups. Clustering is also known as cluster analysis.

The major applications of kmeans clustering are:-

The first and basic step of kmeans algorithm is to decide k number of clusters and assume their centers or centroid. We can take any random cluster as centroid or centers.

a) Importing Libraries required for k-means:-

b) Let’s load the dataset named “Mall_Customers.csv” that we have here for the demo purpose.

c) With the shape function, it can be seen that it has 5 columns and 200 rows.

The shape of our dataset is:-

d) Data feature scaling is a necessary aspect of data preprocessing for clustering algorithms like K-means to deliver accurate results. This is due to the fact that clustering approaches calculate the distance between the data points. Therefore, it is appropriate to combine data from many units under a single scale. We will use min-max scaler for scaling in k-means.

The output, we got after applying min-max scaler:-

e) Let us see how to apply K-Means in Sklearn to group dataset into 2 clusters (0 and 1). The output shows the cluster (0th or 1st) corresponding to the data points in the dataset.

The two clusters are defined as n_clusters = 2

The two clusters are divided into 0 and 1.

Centroid of the two clusters are shown below:-

g) Let's visualize the outcomes. We can clearly see in the graph, data can be divided into more than two groups. Now we need to figure out, how many clusters are there ? 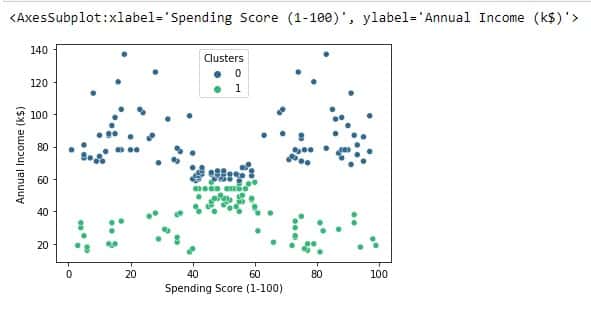 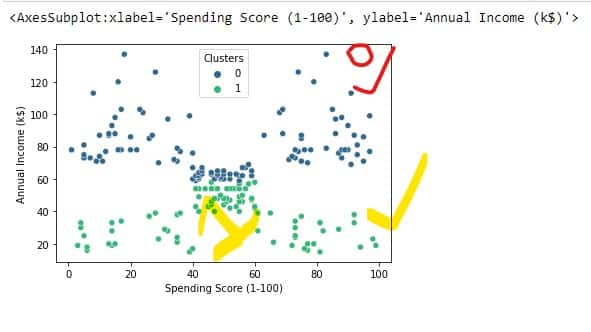 Optimum number of Clusters in K-Means

Now the trickiest part of kmeans algorithm is “In how many clusters dataset can be divided into” Multiple methods can be used to find optimal number of clusters. It can also be done by naïve method “Trial and error”. The other efficient methods are:-

Let’s use the WCSS method. The Elbow Method is a well-liked method for figuring out how many clusters are ideal.

Here, we determined the Within-Cluster-Sum of Squared Errors (WCSS) for several values of k and select the k at which WSS first begins to decline. This appears as an elbow in the WSS-versus-k graphic. 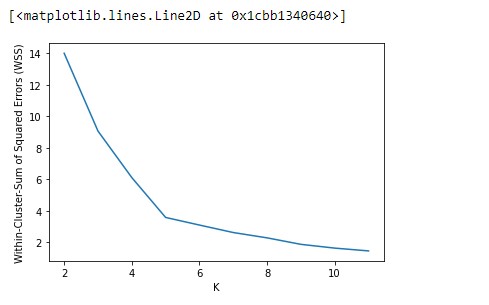 In this article, we have seen that Scikit-Learn makes it easy to work with several machine learning algorithms. We have seen examples of KNN and preprocessing techniques and k-means clustering using sklearn. Scikit-Learn is still in development phase and being developed and maintained by volunteers but is very popular in community.