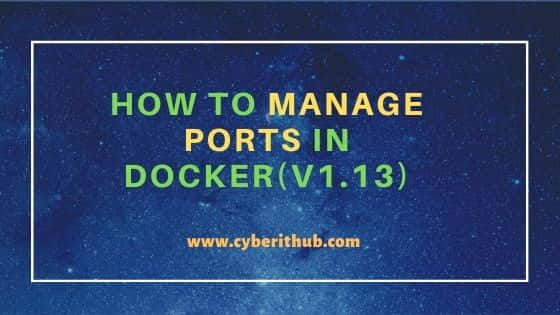 In this article, I will take you through the steps to manage ports in Docker.

By default, when you create a container, it does not publish any of its ports to the outside world. To make a port available to services outside of Docker, or to Docker containers which are not connected to the container’s network, use the --publish or -p flag. This creates a firewall rule which maps a container port to a port on the Docker host.

In computer networking, a port is a communication endpoint. Physical as well as wireless connections are terminated at ports of hardware devices. At the software level, within an operating system, a port is a logical construct that identifies a specific process or a type of network service.

Docker containers can connect to the outside world without further configuration, but the outside world cannot connect to Docker containers by default.A bridge network is created (with the name bridge) when you install Docker. Every outgoing connection appears to originate from the host’s IP space; Docker creates a custom iptables masquerading rule.

How to check port mapping in Docker

Use the docker port command to inspect the mapping Docker creates.

Also Read: How to Install Docker In RedHat/CentOS 7