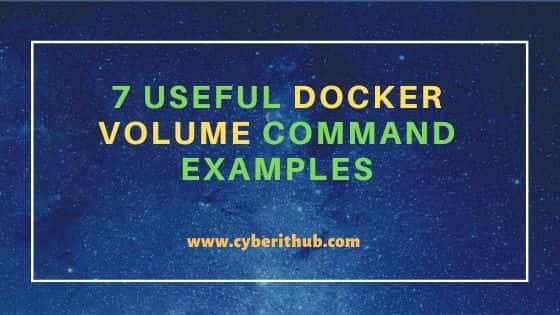 In this article, i will take you through 7 Useful Docker Volume Command Examples. In a very simple way, Docker volume is a folder that exists on the Docker host and is mounted and accessible inside a running Docker container. The accessibility goes both ways, allowing the contents of that folder to be modified from inside the container, or on the Docker host where the folder lives.

Now, this description is a bit of a generalization. Using different volume drivers, the actual location of the folder being mounted as a volume can be hosted somewhere not on the Docker host. With volume drivers, you are able to create your volumes on remote hosts or cloud providers. For example, you can use an NFS driver to allow the creation of Docker volumes on a remote NFS server.

Some Features of Volume in Docker

If you want to create a volume, you need to use docker volume create testvolume command as shown below. You can see from the output testvolume got created.

Example 3: Remove all the Volumes

If you want to remove any volume, let's say testvolume in this case, then you need to run docker volume rm testvolume command. It will remove testvolume from your system as you can see below.

If you want to inspect and verify for any error in your volume, then you can run docker volume inspect testvolume command and check that as you can see below. Here you can see other information like mountpoint, name, scope etc.

If you want to take any help for volume command with docker, you can use --help option as you can see below and it will show you all the options available with the docker command.