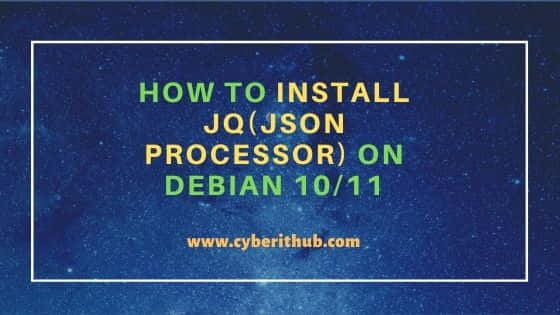 In this article, I will take you through the Steps to install jq(JSON Processor) on Debian 10/11. According to official documentation, jq is a lightweight and flexible command-line JSON processor. It is like sed for JSON data - you can use it to slice, filter, map and transform structured data with the same ease that sed, awk and grep let you play with text. It is written in portable C, and it has zero runtime dependencies. You can download a single binary, scp it to a far away machine of the same type, and expect it to work.

jq(JSON processor) can mangle the data format that you have into the one that you want with very little effort, and the program to do so is often shorter and simpler than you'd expect. One can use this tool from both the command line and with the scripts.

How to Install jq(JSON Processor) on Debian 10/11

b) You should have sudo or root access to run privileged commands.

c) You should have apt or apt-get utility installed in your Server.

If you want to check the installed version of jq utility then you need to use jq --version command as shown below. As you can see the current version of jq is 1.6.

It is now time to test the jq utility by using a small example. Here we are having a small JSON file called user.json whose content looks like below. This JSON file contains the information about user admin.

Now if you want to access the value of user then you need to use jq .user user.json command as shown below.

Once you are done using jq utility, you can simply remove it by using apt remove jq -y command as shown below.