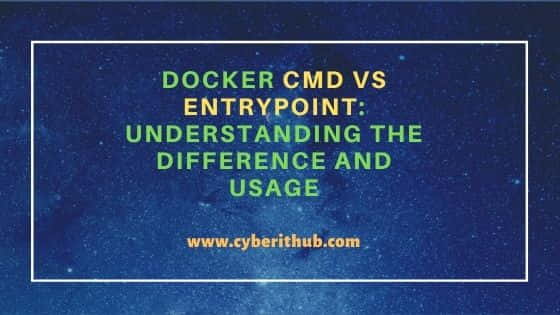 In this article, we will see the difference between Docker CMD and ENTRYPOINT with the help of examples. According to Docker official documentation, both CMD and ENTRYPOINT instructions define what command gets executed when running a container. But often it becomes very confusing for lot of people to understand the difference and usage of both of these instruction. To understand more about its usage, you need to first understand the rules given in the documentation:-

If you want to always run a specific command inside a docker container then one option you have is to hard code that command using CMD instruction. So that whenever you start the container, it will run that command inside the container. So here basically command argument is fixed and nothing can be overridden. To explain this further, Let's take a simple example of below Dockerfile where we are using the alpine 3.14 base image and passing bash command sleep 5 in the CMD instruction. While there are multiple ways to pass bash command in CMD instruction but we will stick to the JSON way of writing.

When you build the above dockerfile using docker build -t demo . command then it should build like below.

Now when you run this container using docker run demo command then it should run sleep 5 command inside the container due which you will see below command will make container sleep for 5 secs before getting exited out.

As you have seen above, CMD is always used when you have to run some fixed command inside a container. But what about a case where you always need to change only the command argument and not the command itself. In that case CMD will no longer be useful. For those cases, you need to use ENTRYPOINT. Using this docker instruction, you can just pass the bash command inside ENTRYPOINT and argument can be passed at the time of starting the container.

You can build the above image using same docker build -t demo . command.

Once the build is successful, you can run the container using docker run demo 5 command. It basically means that you are running sleep 5 command during the start of the container. So when you run this, you will notice that container will sleep for 5 seconds before it get exited out.

If you now try to run different command or pass any argument which was not expected by sleep command then you will see an error on the output like below. This also confirms that you cannot override the command given in the ENTRYPOINT instruction.

3. Using both CMD and ENTRYPOINT

You might also encounter a scenario where you need to do both that is, pass only the argument to the command or override the complete command or sometimes may use only the command without any arguments. So for cases like this where you need to configure a default value, it is always recommended to use both ENTRYPOINT and CMD together. ENTRYPOINT will allow arguments to be passed to the command and CMD will allow the command to be completely overridden with new command at the start of the container. So now the Dockerfile will look like this.

If you now build this Image using docker build -t demo . command then it should look like below.

Finally run the container without any command or argument. By default, this should run sleep 10 command inside the container.