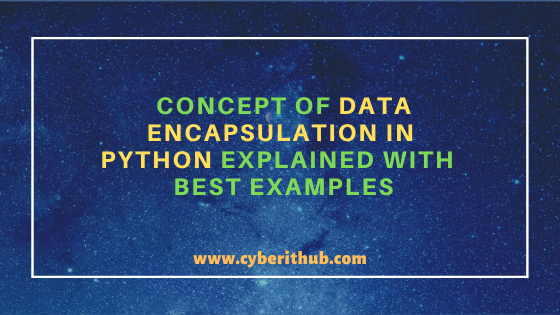 Let's look at the Concept of Data Encapsulation in Python. In the previous tutorials we have looked into the Concepts of Inheritance and Polymorphism in Python so in this tutorial we will look into the next concept of Data Encapsulation in Python Explained with Best Examples. If you are a programmer or developer then you might have used this concept in other programming languages like Java, C++, C# etc.

There you must have seen the usage of access modifiers like public or private but in the case of python we do not use it like that. Here we represent access modifiers differently. Also python provides global access to all the variables and methods. You will get more clarity as we go deep into the Concept of Data Encapsulation in Python. Check more on Python Official Documentation.

The four important pillars of OOPs are:-

What is Data Encapsulation

Concept of Data Encapsulation in Python

Also Read: Inheritance Concepts and Its 5 Different Types in Python with Examples

It's a OOPs concept where data (stored in variables) and methods that operate on these data are bind together in a single unit. Hence puts restriction on accessing these data and methods directly which ensures there are no accidental changes made to them while accessing. Real life example would be, we operate television via a remote.

In python, there are 3 types of access modifiers. They are:

The data member and data functions which are declared as protected can only be accessible from within the class as you can see from below program example.

The data member and data functions which are declared as protected can only be accessible to a class derived from it which can seen through below program example.

How to Check Stateful and Stateless Pods in Kubernetes Cluster