In this tutorial, I will take you through the concepts of Encapsulation in C++. It was designed with a bias toward system programming and embedded, resource-constrained software and large systems, with performance, efficiency¸ and flexibility of use as its design highlights.

Encapsulation is one of the feature of OOPs concept which helps in binding together the data and functions that manipulates those data. 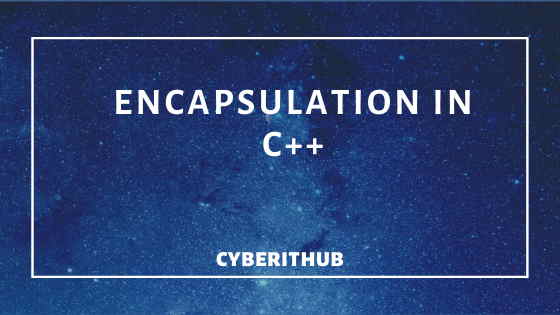 It led to the concept of data hiding. The concepts of encapsulation is often used to hide the internal representation, or state, of an object from the outside .Example would be a simple class which is considered as user defined data type. Encapsulation binds multiple data and data functions in a single unit called class.

So we have encapsulated data x and functions setX(), getX() in a single class called Base.

Program not an Encapsulation

Here only data is defined inside the class which is getting manipulated by the outsider function(not part of class Base).Such cases are not example of encapsulation.

Abstraction is also one of the important feature of OOPs concept using which we only expose the interfaces and the hide the implementation detail from the users. Real life example would be Refrigerator. We increase/decrease the temperature of refrigerator using the button without actually knowing how it is implemented in the background. Hence user only interact with the interface(button here) and doesn't know it's implementation(logic behind them control using that button).

Difference between Encapsulation and Abstraction

There is very minor difference between concepts of encapsulation and abstraction which is ,encapsulation binds the data and functions which manipulate them
in a single unit. Whereas abstraction hides the implementation and expose only the interface to the user.