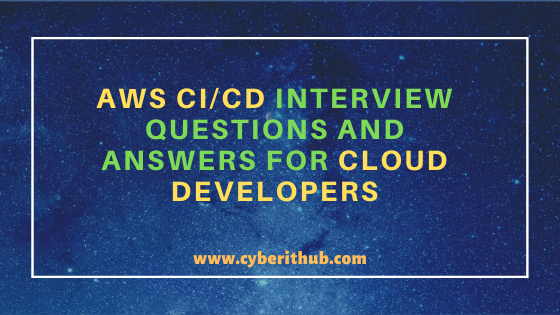 In this session, we will go through 25 Best AWS CI/CD Interview Questions and Answers for Cloud Developers. AWS offers a wide range of developer tools for Continuous Integration and Continuous Delivery process. If you are going to give an interview on these tools then it is very important that you should have complete Knowledge about these tools. AWS CI/CD tools are widely used in Cloud Infrastructure to automate the application release process. Here we will look into the frequently asked Interview Questions from AWS CI/CD topics.

1. Which command is used to make a local copy of AWS CodeCommit repository ?

2. Which command is used to save the changes after editing the local files ?

3. Which command is used to upload the changes to AWS CodeCommit repository ?

4. How to Switch to another branch in the local repo ?

5. What is the AWS Command to create a commit for a repository that adds cyberithub.txt file to a repository named TestRepo in the master branch ?

6. Which of the Source Repositories CodeBuild supports ?

7. Can we use CodeBuild with Jenkins ?

8. What is the benefit of Using CodeBuild with Jenkins ?

Ans. The Build Jobs in CodeBuild eliminates the need for provisioning and managing the Jenkins worker nodes.

9. When does "git pull" command is preferred over "git clone" command ?

Ans. When you want to copy only the incremental change instead of copying the entire repository locally then git pull command is preferred.

10. Can we specify an user action in AWS CodePipeline ?

Ans. Yes we can specify which user can perform what action in AWS CodePipeline.

11. What is the minimum user permission required to see the Pipeline status in AWS Codepipeline ?

12. Which Cloud Service can be used to check the history of AWS CodePipeline API Call ?

13. Which AWS CLI command can be used to create a copy of an existing pipeline ?

14. Which AWS CLI command can be used to get the JSON structure of our existing pipeline ?

15. What is Pipeline in AWS CodePipeline ?

Ans. A pipeline is a workflow with a sequence of stages and actions which describes the changes through which software goes before release process. More on AWS CodePipeline FAQs.

Ans. An action is a task performed on a revision.

18. What are the different order in which Pipeline action can occur ?

Ans. It can occur in two different order:-

Ans. When an action runs, it acts upon a file or set of files. These files are called artifacts.

20. Can a transition be disabled between any stage ?

21. What is a deployment group in AWS CodeDeploy ?

Ans. A deployment group is the AWS CodeDeploy entity for grouping EC2 instances or AWS Lambda functions in a CodeDeploy deployment.

22. How AWS Codedeploy is different from other deploy and management service such as AWS Elastic Beanstalk and AWS OpsWorks ?

Ans. AWS Codedeploy can be used to deploy and update software on any instances including AWS EC2 Instance and On-premise Servers without worrying about resources whereas AWS Elastic Beanstalk and AWS Opsworks can deploy software and create resources like EC2 instances as per the need.

23. What are the parameters we need to specify for a deployment in AWS Codedeploy ?

Ans. There are three parameters we need to specify for a deployment:-

a) Revision: It specifies what we need to deploy

b) Deployment Group : It specifies where we need to deploy.

c) Deployment Configuration : It specifies how we need to deploy.

24. What are the changes we need to do in our code to deploy using AWS Codedeploy ?

Ans. We don't need to do any changes in our code. Just need to add AppSpec file in root directory of our revision bundle that specifies the files which need to be copied and the script which needs to be executed. More on CodeDeploy FAQs.

25. Can we use CodeBuild to automate release process in Cloud ?

Ans. Yes. CodeBuild is integrated with AWS CodePipeline using which you can add a build function and set up continuous delivery.