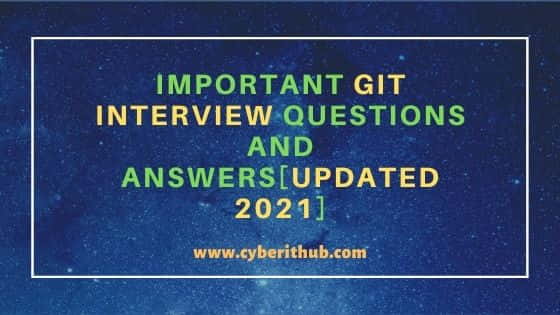 In this article, we will see 72 Important Git Interview Questions and Answers which can be asked from Software Professionals in 2021. Git is a very popular open source code repository used by many small and large scale organizations to manage and deploy their project source code into the respective environments. Git also provide the flexibility to deploy code in multiple kinds of environment. This makes it a very important topic for almost all kind of IT Interviews. Hence it is absolutely necessary for a candidate to be aware of all the git interview questions that can be asked in 2021.

Ans. Git is a free and open source distributed version control system used as central repository to store project files in remote Server as well as in local server. Git has excellent set of features to manage files, branches, metadata and references which makes it a widely used repository.

2. How to Resolve Merge Conflicts in Git ?

Ans. To resolve any merge conflicts in git, you need to first check the files which are causing merge conflicts. Then edit those files and do the necessary changes. Add it again by git add command and then commit it by using git commit command to finalize the merge.

Ans. Hooks are programs placed in hooks directory under .git directory path to trigger actions based on git command execution.

6. How to create git repository ?

Ans. You can visit any repository in GitHub and click on fork button on the upper right hand corner of a repo page to fork that repo.

Ans. git fetch command is used to retrieve the latest metadata information including latest commits, references, branches and files from the remote repository leaving your local work intact as it is.

Ans. git pull command is used to download content from remote repository and match it with local repository.

Ans. You can use git reset or git reset <file> command to unstage all the changes before commit.

15. How to check if there is any file available for commit ?

Ans. git stash command is temporarily used to save your local work so that you can re-access it later and allows you to switch your branch to perform some other development tasks.

Ans. No, it does not overwrite local changes unless explicitly told to do so.

20. When does .git folder gets created ?

Ans. When you run git init command then .git folder gets created.

21. How to remove untracked files in Git ?

Ans. You can use git clean -fx command to remove untracked files from current git branch.

Ans. git checkout command is used to navigate between the branches created by git branch command.

Ans. A branch in a repository represents an independent line of development. It serve as an abstraction for the edit/stage/commit process.

Ans. You can use git rm <file_name> command to remove a file from git.

Ans. HEAD is like a pointer in git which always point to last commit ID of current checkout branch.

Ans. In Git, origin is just like a standard shorthand name for the remote repository that a project was originally cloned from.

Ans. It is a set of scripts that combine standard git commands to perform multiple tasks automatically and in a predefined order.

Ans. A stash in git is a staging area to save the uncommitted files temporarily so that it can be re-accessed and re-applied later.

37. How to create new branch and immediately switch to it ?

Ans. A fork is a copy of a repository. It allows to freely experiment with changes without affecting the original project. More on Github docs.

39. How to untrack a file without deletion ?

40. How to list only the file names that changed between two commits ?

41. How to List information about a commit in Git ?

42. How to avoid full details of all the Commits and only show useful information ?

43. How to search a bug introduced by some commit ?

45. How to delete Git Repository in Linux ?

46. What is the default behavior when you do not pass a mode to git reset ?

47. How many reference types are there in Git ?

Ans. There are three reference types in Git:-

48. What is the default folder of Branches Reference type in Git ?

49. What is the default folder of Tags Reference type in Git ?

50. What is the default folder of Remote Reference type in Git ?

Ans. git push command will push the changes to the remote repository to a specific branch.

53. How to List all the local and remote branches in Git ?

Ans. To save all the project files in a git repo, below steps needs to be performed inside the project root directory :-

57. Which hashing techniques are used in Git to generate IDs ?

58. What are the different states in which a file can exist in Git Repo ?

Ans. There are four different states in which a file can exist in Git Repo:-

Ans. Detached HEAD basically means it is pointing to a Commit ID rather than any branch.

Ans. git cherry-pick is a very powerful command that enables arbitrary git commits to be picked from a branch and apply it to another.

61. How to view all the changes saved in stash ?

62. How to remove stashed changes without applying them ?

64. How to apply changes and remove it from stash ?

65. Which command is called the mixture of git fetch and git merge command ?

Ans. git reflog command keeps a track of all the changes done in a references(i.e on a branch or tag) of a repository.

68. Is it possible to recover a deleted branch from local repository ?

69. How to fetch the log references of a particular branch or tag in Git ?

70. How to prune older reflog entries in git ?

71. How to List Commit objects in reverse chronological order ?

72. How to restore the working tree files with the content from the given tree ?