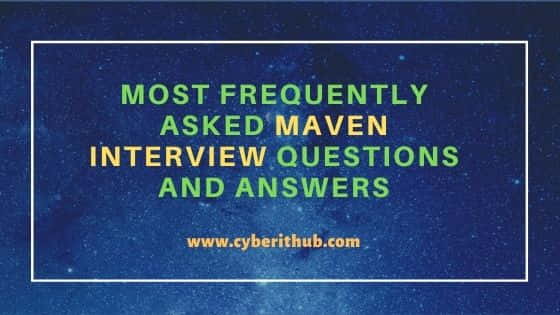 In this article, we will cover 56 most frequently asked maven interview questions and answers. If you are a developer or programmer then you must be aware of maven tool as it is very frequently used by multiple organizations for Project building and management purpose. Thus making it a very hot Interview topic. Here we will go through all important maven interview questions and answers that can be asked in any technical interview. More on Maven docs.

Ans. Maven is an open source build automation tool from Apache Foundation. It can be used to build, compile and deploy projects developed on different languages like Java, C#, Ruby, Scala etc.

Ans. A Project Object Model or POM is the fundamental unit of work in Maven. It is an XML file that contains information about the project and configuration details used by Maven to build the project.

4. Which Maven command can be used to compile Application Sources ?

5. Which is the top level element in all Maven pom.xml files ?

6. Which maven command is used to run unit tests ?

7. What are the minimum requirement for a POM ?

Ans. Below are the minimum requirements:-

8. Which prefix is used to reference all the variables in Maven ?

Ans. Archetype is a Maven project templating toolkit. An archetype is defined as an original pattern or model from which all other things of the same kind are made.

10. How to Create a New Project based on archetype ?

11. Which goal search a repository for archetypes and updates a catalog ?

12. Which library can be best used to deal with the specification of local repository, remote repository, developer workspaces, artifact transports, and artifact resolution ?

15. Where does Maven search POM file by default ?

Ans. It will search in Project Home directory.

16. What will happen if maven does not find dependencies on your local repository ?

17. What are different phases in Maven Life Cycle ?

Ans. Below are the different phases in Maven Life Cycle:-

18.What are different built-in lifecycles in Maven ?

19. What are different advantages of Maven ?

Ans. Below are the different advantages of using Maven:-

20. What are different types of Maven Repositories ?

Ans. There are three different types of Maven Repositories:-

21. What does Local Repository usually contains ?

Ans. It contains all the dependency jars.

22. Can we use the dependencies directly from Remote Repository ?

Ans. No, We need to first download it to the local repository to use.

23. What are the main differences between Ant and Maven ?

Ans. Below are the main differences between Ant and Maven :-

24. What is Maven Central Repository ?

Ans. It is basically a Maven community which works together in developing dependencies which is not currently not available on Local Repository.

25. Which maven command builds the project and packages them into a jar or war file ?

26. Which maven command validates all the project details ?

27. How to create dependency tree of a maven project ?

Ans. Goal in maven refers to a specific task which needs to be accomplished to build and manage the Projects.

Ans. Phases in Maven denotes each of the stages involved in a Build Life Cycle.

30. How to Skip tests while installing or packaging a Project ?

31. How to run maven commands in a debug mode ?

32. What are the different Phases in Clean Lifecycle ?

Ans. Below are the different phases in Clean Lifecycle:-

33. What Should be the order of Inheritance in Maven ?

Ans. The Order of Inheritance in Maven will be:-

34. How many kinds of Plugins are there in Maven ?

Ans. There are basically two types of plugins in Maven:-

35. Which element in a POM file indicates the unique name of artifacts generated by a Project ?

36. Which element in a POM file indicates the location of Project's site ?

Ans. Plugins are basically the extension of Maven functionality that can be implemented in multiple projects to accomplish a specific task.

38. Which element in POM file indicates the unique identifier of the Organization or group that created the Project ?

39. What is the meaning of "convention over configuration" design philosophy which maven uses ?

Ans. Convention over configuration means developers does not need to create build process by themselves, it will taken care by Maven.

40. What are different types of dependencies in Maven ?

Ans. There are two different types of dependencies in Maven :-

41. What are Direct dependencies in Maven ?

Ans. The dependencies which are exclusively included in the Project are known as Direct Dependencies.

42. What is Transitive dependency in Maven ?

Ans. MOJO is known as Maven Plain Old Java Object. It is basically an executable goal in Maven.

Ans. A Build profile is a set of configuration values which is used to set or override default values of Maven build.

45. What are different types of Build Profiles in Maven ?

And. There are three types of Build Profiles in Maven:-

46. Which element indicates the version of the object model a specific POM is using ?

47. Which element indicates the display name used for the Project ?

48. Which maven command detects the unused declared and used undeclared dependencies in a Project ?

49. Which maven command generates a site for the Project ?

51. What are different types of packaging Maven supports ?

Ans. Snapshot is basically the latest temporary development copy of the project available in remote repository.

53. Which command is used to run maven build in offline mode ?

56. Which command is used to compile the Java source classes ?