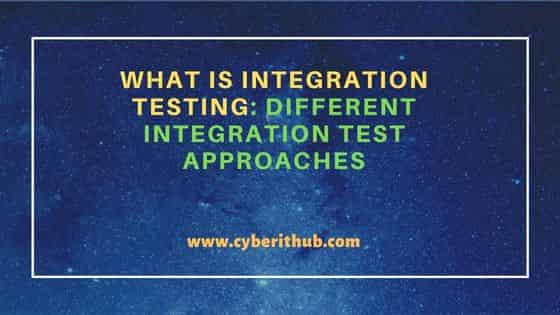 In this article, we will focus on Integration Testing and will try to see when to use Integration testing and what are different integration test approaches to take. As you probably know, unit testing mostly focuses on each and every individual components being developed for the System. Only after removing all the possible defects and making sure the test cases do not reveal any new defects, the components are integrated into a large subsystems.

But at this point, the components can be faulty. This is simply because the test stubs and drivers used during unit testing are possible estimates of the component they simulate. Additionally, unit testing does not show any defects associated with the component interfaces. This is because of the wrong assumptions may be done during calling of the interfaces. So for revealing all those defects, an integration testing has to performed. We will see more about integration testing in below section.

Integration testing helps uncovers all those defects that went undetected in the unit testing. It uncovers by focusing on the interfaces between small groups of components. These components could be code modules, client and server based applications or it could even be a single application.

The integration testing initializes only after finishing the unit testing for each module to be integrated is complete. In this type of testing, you will need to have atleast two or more components to be integrated and tested.

We will look into all the integration test approaches one by one.

In this approach, all the individual modules or components that passed the unit testing are integrated and tested. This approach is mostly obsolete and hence not much in use as it is only suitable for testing small size software. Developers who follows classical waterfall model sometimes follow this approach. The only benefit in following this approach is that if the unit testing has been thoroughly done for the components then this testing can save lot of time. Also, you do not need to create much stubs and drivers in this model.

In reality, most of the times you will find many errors in this approach and it takes lot of time to rectify those errors in comparison to the errors faced in each module. This testing is also very resource intensive as it requires lot of coordination between the modules to work. Another drawback you will notice in this testing is that you can't begin your testing until all the modules are ready and integrated. This causes a major problem in large software systems. Hence it is not advised to use this approach at all.

In this approach, the testing basically starts at the top of the hierarchy and travels down to the branches using two different methods - depth-first method and breadth-first method. We will see both the methods in detail.

This integration approach does not require program stubs when developing and testing the lower level modules. It mainly focuses on building and testing the critical modules first lies at the bottom of hierarchy and make sure to eradicate all the errors in the early stage of development.

However it is also important to note that since the modules at the low levels are specific to an operation, it may not be required to combine several modules in a cluster and build to test them properly. You just need to write and establish a test driver to test the build.

The main limitation of this integration testing approach is that no working model can be presented or tested until you build lot of modules. This add the risk of detecting interface errors pretty late and hence can complicate the entire test management procedures.

In this testing, both top-down and bottom-up approach are applied in parallel. The modules basically divided in two categories - logical and operational. The logical modules are integrated using a top-down approach and operational modules are integrated with bottom-up approach. Then the results of both are converged. This approach minimizes the needs for stubs and drivers. Hybrid testing are mostly used for software that follows waterfall model or incremental software development process model.