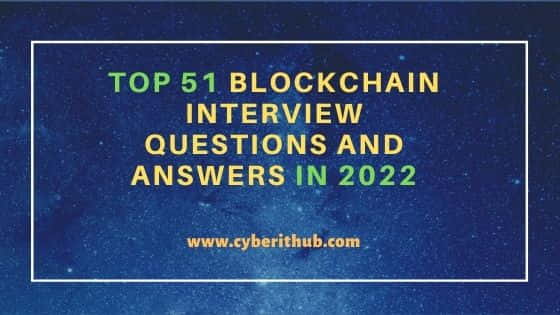 In this article, I will take you through top 51 blockchain interview questions and answers in 2022. Blockchain offers unique solution to build applications in Decentralized Network over traditional way of building applications in Centralized Network. This feature has attracted lot of researchers, programmers and designers towards this technology. The availability of numerous number of applications over last decade made this technology even more attractive. As a result Organization working on this technology always looking for more and more expert professionals to hire. Keeping this in mind, CyberITHub brings you top 51 Blockchain interview questions to help you with your Interviews.

Ans. Blockchain is a public ledger of a timestamped, ordered, and immutable list of all transactions on the bitcoin network.

2. Which is the smallest Bitcoin denomination ?

3. Which encoding is used for Bitcoin addresses ?

4. Which language is used to describe about spending and transfer of bitcoins ?

Ans. Bitcoin uses a stack based language called script to describe the spending and transfer of bitcoins.

5. What is Unspent transaction output (UTXO) ?

Ans. It is an unspent transaction output that can be spent as an input to a new transaction.

6. What is Coinbase transactions ?

Ans. It is the first transaction in a block, always created by a miner.

7. What are transaction pools ?

Ans. Transaction pools are basically memory pools created in local memory by nodes in order to maintain a temporary list of transactions that are yet not confirmed in a block.

8. What are different types of transactions in Bitcoin ?

Ans. Below are the different types of standard transactions in Bitcoin:-

9. Which Script is commonly used in Coinbase transactions ?

10. In which format transactions are encoded before transmitting over the bitcoin network ?

11. When does Stale Blocks gets created ?

Ans. Stale blocks are created when a block is solved and every other miner who is still working to find a solution to the hash puzzle is working on that block.

Ans. Orphan Blocks, also known as Stale Blocks are blocks that are not accepted in the blockchain network due to a time lag into the reporting of the block in question to the network of miners.

13. What is Mining in Blockchain ?

Ans. Mining is a resource-intensive process by which new blocks are added to the blockchain.

14. What is the time period for creating one new block ?

Ans. At an average one new block is created (mined) every 10 minute but sometimes blockchains create a new block as frequently as five seconds.

Ans. The rate of calculating hashes per second is known as hashing rate.

16. What are different types of nodes in Bitcoin network ?

Ans. There are mainly two different types of node in the network:-

18. What are the functions performed by the Full Nodes ?

Ans. A blockchain wallet is a digital cryptocurrency wallet that holds all the private keys owned by the user.

20. Which of the ports are used by Bitcoin to establish network connection with the Peer ?

21. Which is the most popular language used to write smart contracts for Ethereum Blockchain ?

22. Who is Known as the Creator of Blockchain Technology ?

Ans. It was created by an unknown person goes with the name Satoshi Nakamoto.

Ans. Truffle is the most popular development environment and testing framework for DApp developers.

Ans. MetaMask is a browser plugin that allows the normal browser to behave as a web3 browser, to interact with DApps, and to send transactions without running an Ethereum node.

Ans. The initial block of the chain is known as Genesis Block.

26. Where can we store a Blockchain ?

Ans. Blockchain can be stored in either flat file or database format. For example, bitcoin uses LevelDB to store metadata about all the blocks that are downloaded to the disk.

27. How does all the blocks are connected in a Blockchain ?

Ans. Each block has a unique fixed size identifier called Hash. Since all the blocks are linked together by this hash value, each block will have the identifier of previous block.

28. Which algorithm is used to hash the block header in Bitcoin ?

29. What's the meaning of height in a blockchain ?

Ans. Height is nothing but the distance of the block, or the block count from the genesis block.

30. What are different sections each block contains ?

31. Does the block hash is a hash value of entire block ?

Ans. No, It is only the hash value of block header and Transactions.

32. What are different structure components of a Block Header ?

Ans. Merkle root is the value of the Merkel Hash Tree. More about Merkle Tree

34. What are the disadvantages of using Blockchain Technology ?

Ans. Below are few of the disadvantages:-

35. What is Byzantine General's Problem, or Byzantine failure ?

Ans. It is a fault which occurs when there is a loss of a service in a system that needs to achieve a consensus. This kind of failure is witnessed in distributed systems, where it is difficult to gather information about the status of components, and the presence of bad actors makes it more difficult to reach a consensus.

36. Which algorithm was used to solve the Byzantine failure problem ?

Ans. It was solved by using a consensus algorithm called Proof of Work.

37. How does asset owners prove their Identity ?

Ans. The asset owners prove their identity by signing the transactions using their private key.

38. Who will be able to claim the asset in a Bitcoin network ?

Ans. The one who will be having the Private Key.

Ans. It stands as Simplified Payment Verification node which will be used for payment verification without needing to download the entire blockchain.

40. What are different types of Blockchain wallets ?

Ans. Wallets are categorized into two types based on the way key is created:-

41. What is Non-deterministic wallet ?

Ans. A non-deterministic wallet is a collection of randomly created private keys that bear no relation to each other.

42. What is Deterministic wallet ?

Ans. A deterministic wallet is also called a seed wallet because all the keys in this wallet are derived from a single seed.

43. What is the major disadvantage in using Non-deterministic wallet ?

Ans. Since Non-deterministic wallet contains randomly created private keys which bears absolutely no relation to each other, it is extremely difficult to reconstruct in the event that they are lost.

44. What is Block validation ?

Ans. It is a process of checking whether the latest block has a pointer or hash reference pointing to the previous block.

45. What is Block Synchronization ?

Ans. It is a process under which each node that joins the blockchain network needs to update its local copy of blockchain to synchronize its state with the global state of the rest of the network.

47. What are different types of interfaces blockchain application provides ?

Ans. NEO is a blockchain platform and cryptocurrency that facilitates the creation and management of digital assets and smart contracts.

49. Where does Cryptocurrency exchange store most of their coins ?

Ans. Exchanges store most of their coins in hot storage so that withdrawals can be performed instantly.

Ans. It stand as Initial Coin Offering, is the cryptocurrency industry's equivalent to an Initial Public Offering (IPO). A company looking to raise money create a coin and launches it as ICO.

Ans. If a participant in the network is able to control more than 50% of the resources required to reach the consensus to create blocks, then the block creation mechanism can be manipulated by that participant. The 51% attack can be performed on any of the consensus algorithms, but it is generally used in Proof of Work-based blockchain networks.