In this article, I will take you through the difference between Ruby blocks and Procs.

c)Codes in the block is always enclosed within braces

d)A block is always invoked from a function with the same name as that of the block. 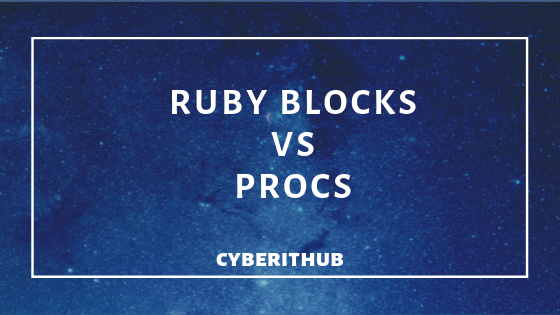 a)PROC class can turn block into an object by wrapping blocks in its instance.

b)Proc objects are blocks of code that have been bound to a set of local variables.

c)This turns our block into a first class function and then we can perform all sorts of things with Blocks as we can do with a normal object.

Converting between a blocks and Procs

Another common thing you will see in Ruby code is using the & operator to convert between blocks to Procs and Procs to blocks.

For example, imagine we have this method:

When this method is called with a block, the block will be converted into a Proc. You can then use the block as if it were a Proc inside of the method:

Also Read: How to Install Docker on CentOS 7