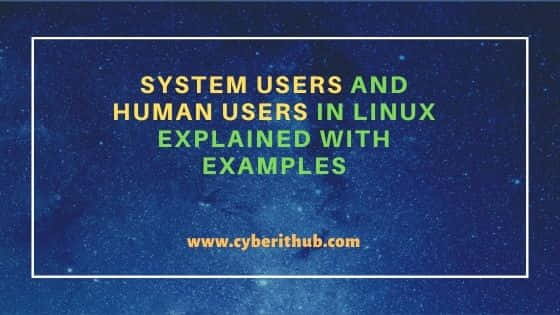 In this article, we will look into two types of user in Linux - System Users and Human Users. As you probably know, every Linux System has an entity called User which performs a range of system management tasks. Each user will have a unique ID called UID(User ID) and GID(Group ID). Similarly, there is another entity available called groups which is nothing but collection of users has its own role to play. User Management and Groups is an integral part of Linux System Administration which needs to be understood in detail. Here we will look into different types of users in detail with examples.

System Users and Human Users in Linux Explained with Examples

There are basically two types of users in Linux:-

Each user has unique UID(User ID) and GID(Group ID). Whenever a user is created, it owns a home directory where all personal files and folders can be stored.

a) useradd -> to create a new user

b) userdel -> to delete an existing user

f) passwd -> create or change password for any user

How to Find UID and GID of a user

To find the UID or GID of any user simply execute below command.

a) id -> to view the UID and GID of current user

System users can also be created using useradd command but with some extra flags in the command. Below we are creating a system user called ‘cyberuser’ where

/bin/false -> dummy command that prevents the user from logging into the system.

System user can be created using the same command but with -r flag.

Human users differ from Group users in terms of UID and GID range that are assigned to them. This setting can be found in /etc/login.defs file. Notice the below section of the file where UID and GID range is different for system and human users.