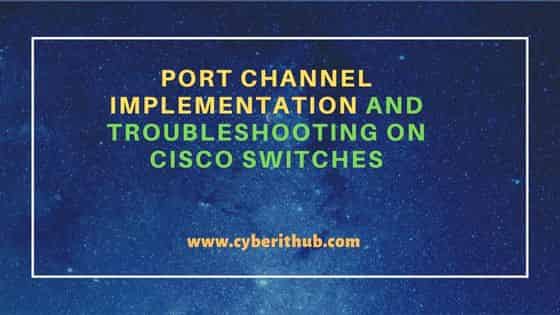 Port channel is one of the most important topics. Here we will discuss some scenarios in which more bandwidth or redundancy is needed between devices and that can be catered by a single logical link. Multiple links could be connected between devices to increase bandwidth. STP known as Spanning tree protocol which is active on layer 2 devices especially on cisco switches, it will block redundant links in order to avoid loop. A link aggregation technology is needed that allows redundant links between devices that will not be blocked by STP. That technology is known as EtherChannel.

EtherChannel is a link aggregation whose primarily function is to make on logical link of various groups of physical ethernet links. It is used to provide fault-tolerance, load sharing, increased bandwidth, and redundancy between switches, routers, and servers. EtherChannel technology makes it possible to combine the number of physical links between the switches to increase the overall speed of switch-to-switch communication. 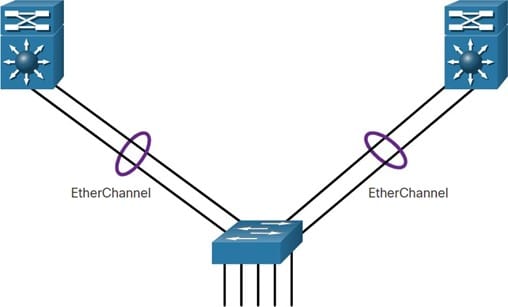 EtherChannel or port channel, the concept was developed by Cisco as a LAN switch to switch technique which was grouping of several fast ethernet or Gigabit Ethernet ports into one logical channel. When an EtherChannel is configured, the resulting virtual interface is called a port channel. The physical interfaces are bundled together into a port channel interface, as shown in the figure.

EtherChannel technology has many advantages, including the following:-

EtherChannel has certain implementation restrictions, including the following:-

EtherChannel’s or Port Channel can be formed through negotiation using one of two protocols:-

These protocols do allow ports with having same characteristics while making port channel through dynamic negotiation.

Let’s have some explanation of the Port aggregation protocol. PAgP is a Cisco-proprietary protocol that aids in the automatic creation of EtherChannel links. When an EtherChannel link is configured using PAgP, PAgP packets are sent between EtherChannel-capable ports to negotiate the forming of a channel. When PAgP identifies matched Ethernet links, it groups the links into an EtherChannel. The EtherChannel is then added to the spanning tree as a single port.

When it is enabled, PAgP also manages the Ether Channel. This sent packets every 30 seconds. It also checks the configuration and manages the links additions and failures between the two switches. It also makes sure to have Port channel created and all ports are having the same type of configuration.

LACP is part of an IEEE specification (802.3ad) that allows several physical ports to be bundled to form a single logical channel. LACP allows a switch to negotiate an automatic bundle by sending LACP packets to the other switch. It performs a function similar to PAgP with Cisco EtherChannel. Because LACP is an IEEE standard, it can be used to facilitate EtherChannels in multivendor environments. On Cisco devices, both protocols are supported.

The table shows the various combination of LACP modes on S1 and S2 and the resulting channel establishment outcome.

There are some important guidelines and restrictions for configuring the port channel:-

Step 1:  Specify the interfaces that compose the EtherChannel group using the interface range <interface_name> command in global configuration mode. The range keyword allows you to select several interfaces and configure them all together.

The steps which we have discussed are very simple and easy to configure the port channel. When you configure the device in your network, one should always check and verify the configurations. If there are some problems or errors, you need to understand and should be able to handle the problems or fix it. There are several commands to verify an EtherChannel configuration.

All interfaces within an EtherChannel must have the same configuration of speed and duplex mode, native and allowed VLANs on trunks, and access VLAN on access ports. Ensuring these configurations will significantly reduce network problems related to EtherChannel. Common EtherChannel issues include the following:-