In this article, I will take you through 6 Simple Steps to setup passwordless ssh login using ssh keygen. SSH is a network protocol that allows one computer to connect to another computer over an unsecure network like Internet.Without encryption,data transfer over the Internet in a plain text form makes it easier for somebody to intercept important information like user name and password and then use it.However ssh provides a mechansim where all the data will be encrypted through a tunnel and hence allows you to connect to a remote machine securely, transfer data securely and even allow you launch command for the remote machine safely.

SSH is also known as secure shell or secure socket shell protocol which is mainly used to connect to remote server securely. ssh connection by default always happens on port 22. Although you have an option to change this port from sshd_config configuration file but usually it is not recommended to.

SSH primarily works on a Client Server Model. In this model, you will have a public/private key pair which can be generated through tools like ssh keygen on linux. Then your public key will always be stored in Server and client which is usually a computer makes contact with ssh server and provide id of the key pair it wants to prove his identity. The ssh server then creates a challenge which is encrypted by the public key and sent back to the client.You as a client then take back the challenge decrypt it with the private key and send original channel back to ssh server. Once the negotiation is complete,connection is established now between client and server successfully.

SSH without password login means whenever you try to login to remote server using secure shell(ssh), you need not to be given any ssh password. This is mostly required when you want to perform some task on multiple servers by connecting the servers through ssh.

What is SSH Keygen

As per ssh keygen man page, ssh-keygen generates, manages and converts authentication keys for ssh(1). ssh-keygen can create keys for use by SSH protocol versions 1 and 2. Protocol 1 should not be used and is only offered to support legacy devices. It suffers from a number of cryptographic weaknesses and doesn't support many of the advanced features available for protocol 2.

It means ssh keygen tool uses rsa login algorithm to generate public/private rsa login key pair. As per RSA Documentation, The Rivest-Shamir-Adleman public-key algorithm (RSA) is the most widely used asymmetric cipher. It derives its security from the difficulty of factoring large integers that are the product of two large primes of roughly equal size. Factoring is widely believed to be intractable (i.e., infeasible, admitting no efficient, polynomial-time solution), although this isn't proven. RSA can be used for both encryption and signatures.

What is SSH key login ?

This is another method of authentication in which you do not require any password to be given for authentication. It will be based on private key authentication where you already have public key added to your server. 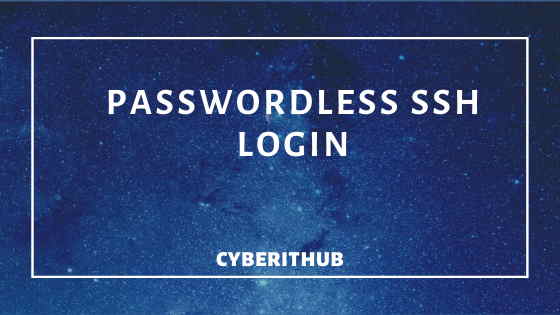 Also Read: How to Install or Enable ssh on ubuntu

In the beginning you need to create a public/private key pair using rsa algorithm by running ssh-keygen -t rsa command.

If you want to check all the cipher supported by ssh, you can check that by running ssh -Q cipher command.

If you want to check all the Key supported by ssh, you can check that by using ssh -Q key command.

You can go to remote server and verify if .ssh directory created under /home/test directory or not.

Once .ssh directory created, now you need to copy your public key to a file known as authorized_keys under .ssh directory in the remote server as shown below.

Once public key is copied, you need to make sure appropriate permission are assigned to the file ssh authorized_keys.