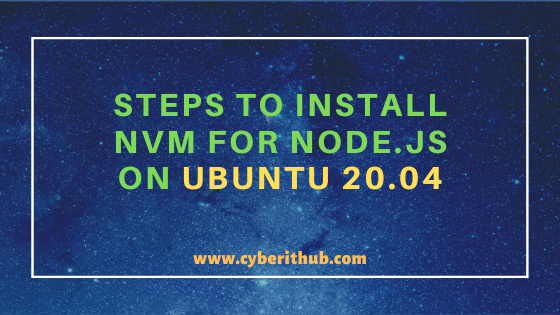 In this article, I will take you through 12 Easy Steps to Install NVM for Node.js on Ubuntu 20.04. Node Version Manager(NVM) is the most popular tool available for node.js version management. If you are Node.js developer or beginner then it is very important for you to have understanding about this tool. Using nvm tool you can easily install different versions of Node.js and even switch your version back and forth. This activity usually done to test the code with different version. Here I will not only explain the steps to install nvm for Node.js but will also explain how to switch your node version.

NVM is known as Node Version Manager. It is used for installing and managing different versions of Node.js in various Linux environments. Any Node.js developers working on multiple projects which requires different Node.js versions usually prefer this tool to install, uninstall and switch various node versions instead of manually installing and uninstalling each version required for each of the projects. One can easily build their app using this tool. Undoubtedly, this tool saves lots of time and effort.

b) You should have apt tool installed in your Server. To Know more about apt get tool, you can check 20 Useful apt get examples on Ubuntu.

c) You should have curl tool installed in your Server. To Know more about curl tool, you can check 20 Useful curl command in Linux with Examples | How to Use curl in Linux.

d) You should have sudo access to run Privileged Commands. Please Check How to Add User to Sudoers to know more about providing sudo access to the User.

Before installing a new package in your system it is always recommended to update your system using apt update or apt-get update as shown below. This command will download and install all the latest available updates from Ubuntu Repository.

After updating your server you need to download and install nvm using curl -o- https://raw.githubusercontent.com/nvm-sh/nvm/v0.35.3/install.sh | bash command as shown below. You can visit GITHUB to know more about the latest installation script currently available. 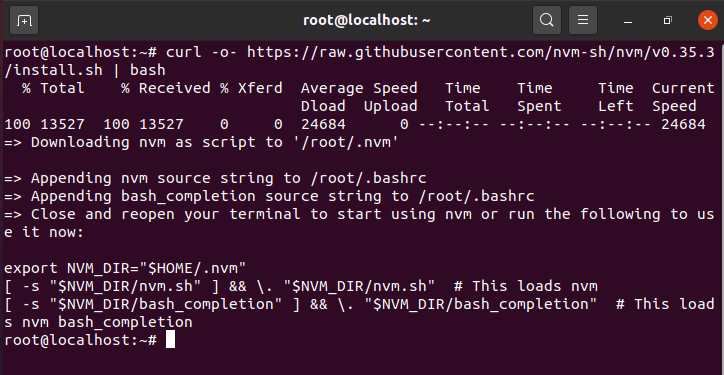 Once NVM is installed in your server, you can check its version by using nvm --version command as shown below. As you can see from below output current installed nvm version is 0.35.3.

After installing NVM you can now install Node.js using nvm install node command as shown below. This command will download and install the latest node.js version from its official Link.

You can check the Node version using node --version command. As you can see from below output, current installed version is v14.10.0 which is the latest version available at the time of writing this article.

If you want to install the latest Node.js LTS version then you need to use nvm install --lts command as shown below. This command will search and install the Latest available LTS version for you. You don't have to specify the version manually.

If you want to check all installed Node.js version then you need to use nvm ls command as shown below. As you can see from below output, currently there are 3 different node versions are available in the system.

If you want to uninstall a specific Node.js version then you can use below nvm command. In this example, we are uninstalling version 11.5 using nvm uninstall 11.5 command as shown below. After successful uninstallation, if you run nvm ls command then you will not see version 11.5 in the list.

If you want to install the stable node.js version then you need to use nvm install stable command as shown below. You might have noticed we are not specifying any particular version here so this command can be used if you don't know the latest stable version.

33 Practical Examples of ulimit command in Linux/Unix for Professionals