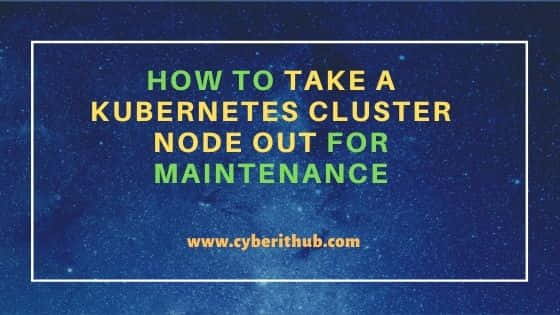 In this article, we will understand how to take a Kubernetes Cluster node out for Maintenance. Performing node maintenance is a standard task which needs to be done periodically. Sometimes taking the node out from a Cluster and joining it back to the Cluster can become tricky and cumbersome. Fortunately it is very easy to do in a Kubernetes Cluster. You just have to follow the process well. Here I am going to explain you the entire process with the help of an example node so that it will be easy for you to understand and perform in a production kind of environment. But before that let's quickly go through our lab setup.

We are having one worker node called "node-1" and one master called "master" in our Kubernetes Cluster. We are having three test pod currently running on node-1 and no pod running on master. Our task is to take the node "node-1" out of the Kubernetes Cluster for maintenance and then joined it back once the maintenance is completed. It is important to ensure that when we take the node out, all its load should be transferred to master without any hiccups.

How to take a Kubernetes Cluster node out for Maintenance

Also Read: How to Deploy Metrics Server on a Kubernetes Cluster [Step by Step]

Step 1: Check all the Pods

First let's verify all the pods are running fine by using kubectl get pods -o wide command. This command will show detailed output which includes the pod status, node on which it is running, number of restart it had, Age, IP etc.

Step 2: Verify all the Nodes

Step 3: Drain out the Node

Now you can move ahead with the maintenance and drain out first node-1 using kubectl drain node-1 command as shown below. The idea of drain out is to make sure all the loads of node-1 gets transferred to other available node in the Cluster. In our case, since we have only two nodes i.e master and node-1 so in a successful drain out all the loads of node-1 should get transferred to master. But hey what's showing below. It looks like there is some error and it is unable to drain node "node-1". If you are also facing this kind of error then here you need to add one more option i.e --ignore-daemonsets to get through this.

So now you have to run kubectl drain node-1 --ignore-daemonsets command as shown below. This will mark the node unschedulable to prevent new pods from arriving. You have to wait till all the pods get evicted.

Step 4: Verify all the apps

Now you can verify if all the pods got transferred to master by using kubectl get pods -o wide command. Then you can see that indeed it is transferred and running fine. So this confirms that node-1 has been successfully unscheduled from running any apps. Now you can proceed with the maintenance of node "node-1".

After maintenance is completed, we need to make the node schedulable again by bringing it back to the cluster using kubectl uncordon node-1 command as shown below.

To verify if the node is back in cluster, you can run kubectl get nodes command. If you see the status as Ready then it confirms that node-1 successfully scheduled for arriving pods.

But here is another interesting output you can notice when you run kubectl get pods -o wide command again. You can notice that currently there are no pods running on node-1 even after the node has been successfully joined back. Well, it is simply because we had removed this node for maintenance and now it will only schedule when new pod arrives.

Another interesting point you might think why all the pods were placed on master when node-1 was taken out for maintenance. Well, it is simply because master node did not had any taint. This you can verify by grepping the taint keyword from kubectl describe nodes master command as shown below.