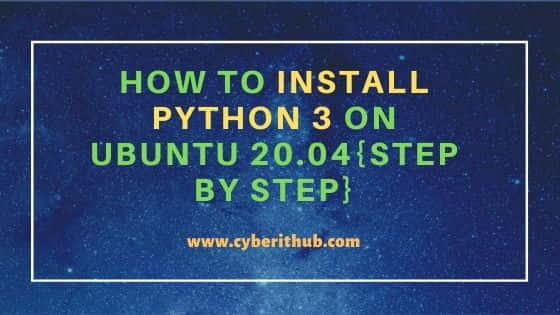 In this article, I will take you through the steps to Install Python 3 on Ubuntu 20.04. Python is a very popular open source interpreted high level programming language. Developers and Programmers love to code in this language due to its easy integration with other programming languages. While there are many ways to install python 3 on Ubuntu 20.04 but here we will focus on the most simplest way. More about Python 3

b) You should have sudo or root access to run privileged commands.

c) You should have apt or apt-get utility installed in your Server.

Before you think about installing any new package it is always advised to run system wide update once using apt update or apt-get update command as shown below. It will install all the latest versions of your packages and reduce the chances of any broken package error.

You can check the installed version of python using python3.8 --version command. So as you can see it is 3.8.10.

Now you must be thinking how can we verify the usage of python tool. Well, you can write a simple python file and run it to confirm. For example here we are writing a simple python program to print hello world on the output. We are creating a new file called hello.py using our favorite nano editor and writing a print statement to display hello world as shown below.

Please never run apt remove python3 -y or apt-get remove python3 -y command even by mistake as it will not ask for your confirmation before removing all the python3 related packages. Running this command will have disastrous effect of your Server. Hence be careful with the command you run especially if you are running on a production Server.