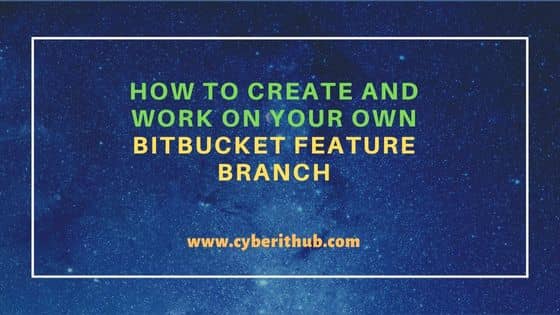 In this article, I will show you how you can work on your own Bitbucket feature branch. Usually in a team of developers, when multiple people are working on a project then each of the team member will have their own feature branch created to work on a particular feature. So that when the work gets completed, it will be easy to review the code. Bitbucket is a very popular Git based source code repository used by most of the Organizations to manage and maintain their project source code. Hence here we will see how a developer can create and work on their own Bitbucket feature branch. More about Bitbucket.

How to Create and Work on your Own Bitbucket Feature Branch

b) You should have access to clone your Project specific repo.

c) You should have access to create your own Bitbucket feature branch.

c) You should have commit access to your Bitbucket feature branch.

You need to first login to your Bitbucket using valid Username and Password. Then you need to go to your Project and select the repo in which you need to work on. For the moment here we are using a project called Test Project and a repo called example-app repo. 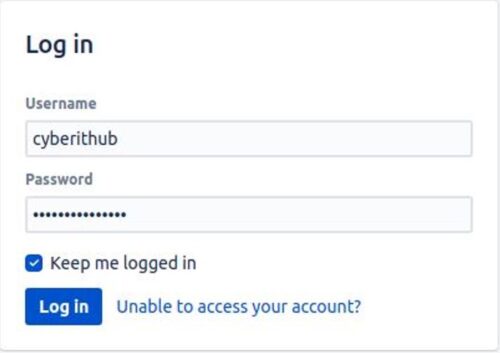 Here you need to first select the branch from where you want to create your feature branch. Once selected, click on three dot(...) and then select Create branch from here as highlighted below. 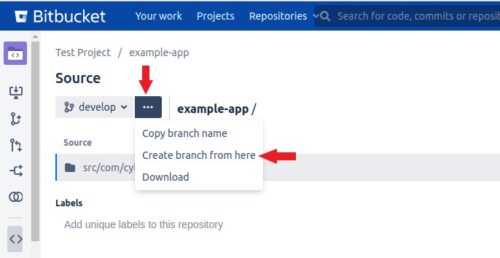 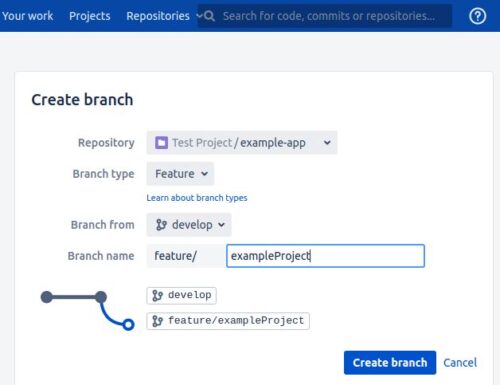 Once given, click on Create branch. It will create your feature branch with all the files cloned from develop branch as shown below. 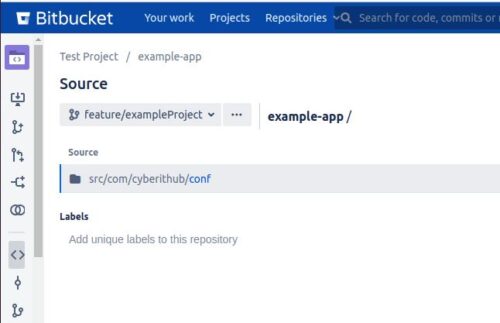 Now you need to clone the repo in your local system by using git clone https://app.cyberithub.com/bitbucket/scm/hello/example-app.git command as shown below. To get the repo URL, click on Clone on the left pane and copy the URL. 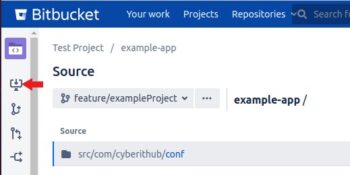 Then go to that repo by using cd example-app command as shown below.

Here you need to check your current branch by using git branch command. By default, you should be either in master or develop or may be in some other branch depending on the branching policy you have. As you can see, here we are in develop branch.

To work on your own branch, you need to create a local branch and switch on it by using git checkout -b feature/exampleProject command as shown below.

If you want to pull all the changes from a specific branch(let's say main in our case) before starting to work on our feature branch then that also you can do by first pulling the changes using git pull origin main command as shown below.

Once all the project work is completed, you can check the changes that needs to be added using git status command.

To add all the changes to the current branch, use git add . command.

Then to commit all the added changes, use git commit -m "Adding minor changes in pom.xml" command.

Once all the changes are committed, you can push those changes to the remote branch by using git push -u origin feature/exampleProject command as shown below.

Please note that I have also committed other changes previously along with the current changes and pushing all of them together here. Hence you will see lot of objects pushed in the remote Bitbucket Feature Branch.

You can check all the changes if pushed correctly in your remote feature branch. Now it is time to create PR(pull request) to merge your feature branch to the master or develop depending upon your branching policy. You can click on Create Pull Request on the left column as highlighted below.

Then select the branch you want to merge your feature branch with. In our case, we want to merge feature/exampleProject with develop. So we will select develop on the Destination branch. 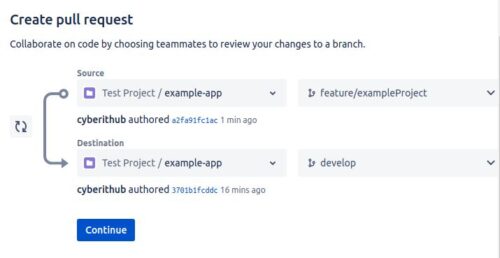 Finally select the approvers in the approval list who will review the PR. Once done, click on Create. Later on, once your PR is approved you can merge the feature branch and verify the changes. During merging, you will get an option selected called Delete Source branch after merging during merge. You can either choose to delete your source feature branch at the time of merging or you can also delete it later, in that case you need to deselect Delete Source branch after merging option. 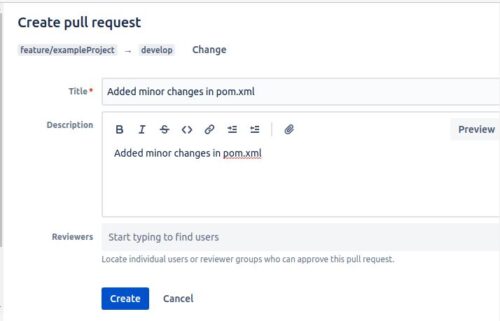 Once the feature branch is merged and then later deleted, you can come back to your local system and delete the local feature branch as well. If you want you can also delete the cloned directory by using rm -rf example-app command as shown below.