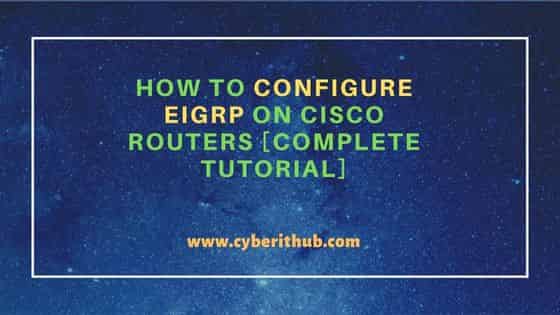 In this tutorial, we will see what is EIGRP and how to configure this protocol on Cisco routers. EIGRP also known as Enhanced Interior Gateway Routing Protocol is a routing protocol designed and developed by Cisco Systems, Inc. It is famous for using incremental updates unlike RIP and IGRP which uses periodic updates. This means that changes are propagated immediately in EIGRP which speeds up the initial information transfer and decreases the time for change data to reach the whole network. EIGRP uses DUAL(Diffusing Update Algorithm) to find alternative loop-free paths in case the main path is no longer present. We will see some of its additional features and configuration in below section.

What is the EIGRP

How EIGRP different from other Distance Vector Protocols

EIGRP, originally a Cisco proprietary protocol, was made open source and hence supports multi-vendor routers, making it even more popular. We will be learning how to implement this routing protocol in Cisco routers, to simulate the configuration we will use the packet tracer software.

However, to ensure smooth progression, it's advantageous for us to understand some underlying concepts behind this protocol's operation before we head over to implementation.

It is important to view the operation of this protocol from a few related concepts :-

a) Neighbor discovery: EIGRP routers send updates that contain information for a changed route specifically to the routers that need the information. This contrasts with normal distance vector operation where entire routing tables are exchanged.

This information, essentially "hello" packets, is passed to routers directly attached to the sending router and enables them to dynamically learn about the status of the intended receiver - declared alive as long as it receives the hello packet and it is only when a router is alive that routing information can be exchanged.

b) Route selection: through DUAL (Diffusing Update Algorithm), EIGRP routers use computations to determine and select infinite loop-free paths. This ensures the path for forwarding is the least cost path to the destination.

c) Packet delivery: EIGRP uses reliable transport to ensure the ordered delivery of packets to its neighbor. This feature is usually used when it's important e.g router updates.

Also, just like link state protocols such as OSPF, EIGRP routers have the following asides a routing table :

Our lab setup includes below components :-

How to Configure EIGRP on Cisco Routers [Complete Tutorial]

First, we configure the end devices and router's interfaces by assigning IP addresses to them and then turning the links on. Then we enable the EIGRP protocol. EIGRP is very simple to implement and the process follows that of most protocols. Finally, we will verify our connections using commands that will help us test our configuration to make sure the routers are truly able to use the EIGRP protocol.

Step 1: Setting up the Network

Let us begin by setting up the network and assigning IP addresses to the various interfaces of our two routers and two end devices. 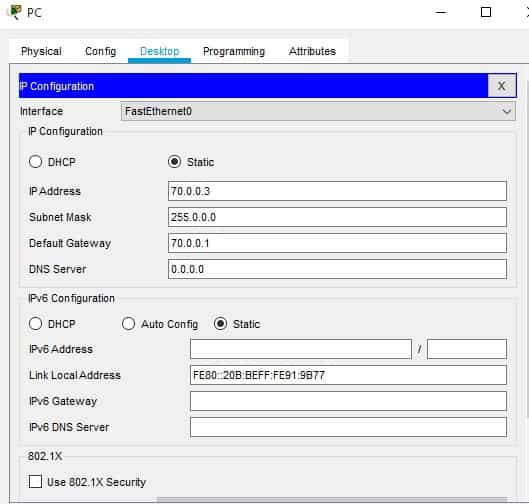 Then we turn the interfaces on using the no shutdown command.

Remember to turn the links on using the no shutdown command else our network will not pass data.

After setting up the network successfully, then the next step is to set up the EIGRP protocol using the commands below.

This is similar to the command for both OSPF and RIP

We will be using these commands for our two routers.

In the global config mode, enter the EIGRP commands as shown in the image below :

Do the same thing for Router 2. From global config mode, enter the EIGRP command.

After we have enabled the protocol in the preceding steps, it's time to find out if we did our configuration successfully and if the routers can now operate using the EIGRP protocol, we can do this by using various commands.

To verify EIGRP we will use show ip eigrp neighbors and show ip eigrp interfaces. The first command will let us see information about the various neighbor routers. The second will show the pending interface routes. 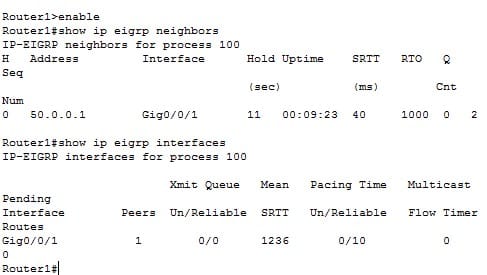 IP-EIGRP neighbors for process 100 In line 3 of the screenshot above indicates that the router is configured and can detect its neighbor EIGRP router.

Let's do the same for router 2. Enter the two commands one after the other from the privilege exec mode as shown below. 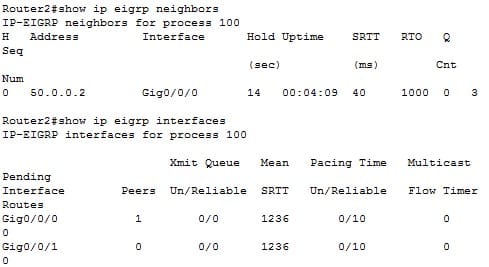 Router 2 indicates the same thing. Above output shows we have succeeded in configuring EIGRP in our routers.

EIGRP in its hybrid design offers the best of the distance vector protocols and the great features of link state. Configuring your routers to use it isn't challenging either. In this article, we have discussed some of the important features of EIGRP and how to configure it using few easy steps.