In this article, I will take you through the Introduction to Openstack and its components. It is a free and open-source software platform for cloud computing, mostly deployed as infrastructure-as-a-service, whereby virtual servers and other resources are made available to customers.

What is Private Cloud

Private cloud refers to a model of cloud computing where IT services are provisioned over private IT infrastructure for the dedicated use of a single organization. A private cloud is usually managed via internal resources.

OpenStack is a set of software tools for building and managing cloud computing platforms for public and private clouds. Backed by some of the biggest companies in software development and hosting, as well as thousands of individual community members, many think that OpenStack is the future of cloud computing. 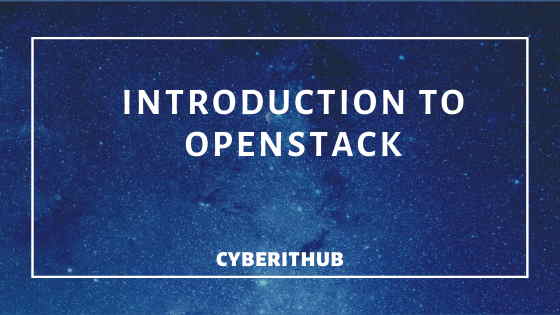 OpenStack consists of various components with a modular architecture. Let’s briefly look towards the components of OpenStack.

Nova seeks to provide a framework for the large-scale provisioning and management of virtual compute instances. Similar in functionality and scope to Amazon’s EC2 service, it allows you to create, manage, and destroy virtual servers based on your own system images through a programmable API.

Nova can be deployed using HyperV technologies such as KVM, VMware, LXC, XenServer, etc. It is used to manage a large number of virtual machines and other instances that does various computational tasks.

The Image service (glance) project provides a service where users can upload and discover data assets that are meant to be used with other services. This currently includes images and metadata definitions.

OpenStack Object Storage (swift) is used for redundant, scalable data storage using clusters of standardized servers to store petabytes of accessible data. It is a long-term storage system for large amounts of static data which can be retrieved and updated.

Swift is a highly available, shared, eventually consistent object store. It helps organizations to store lots of data with ease, and also cheaply and efficiently. It ensures data replication and distribution over various devices, which makes it ideal for cost-effective, scale-out storage.

Horizon is the authorized implementation of OpenStack’s Dashboard, which is the only graphical interface to automate cloud-based resources. To service providers and other commercial vendors, it supports with third party services such as monitoring, billing, and other management tools. Developers can automate tools to manage OpenStack resources using EC2 compatibility API or the native OpenStack API.

Keystone provides a central list of users, mapped against all the OpenStack services, which they can access. It integrates with existing backend services such as LDAP while acting as a common authentication system across the cloud computing system.

Neutron provides networking capability like managing networks and IP addresses for OpenStack. It ensures that the network is not a limiting factor in a cloud deployment and offers users with self-service ability over network configurations. OpenStack networking allows users to create their own networks and connect devices and servers to one or more networks. Developers can use SDN technology to support great levels of multi-tenancy and massive scale.

Cinder provides persistent block storage management for virtual hard drives. Block Storage allows the user to create and delete block devices, and to manage the attachment of block devices to servers. The actual attachment and detachment of devices is handled through integration with the Compute service. Both regions and zones can be used to handle distributed block storage hosts.

Ceilometer provides user-level usage data for OpenStack-based clouds, which can be used for customer billing, system monitoring, or alerts. Data can be collected by notifications sent by existing OpenStack components (for example, usage events emitted from Compute) or by polling the infrastructure (for example, libvirt).

Heat is a service to orchestrate multiple composite cloud applications through both the CloudFormation-compatible Query API and OpenStack-native REST API, using the AWS CloudFormation template format.

Also Read: How to create an EC2 Instance in AWS