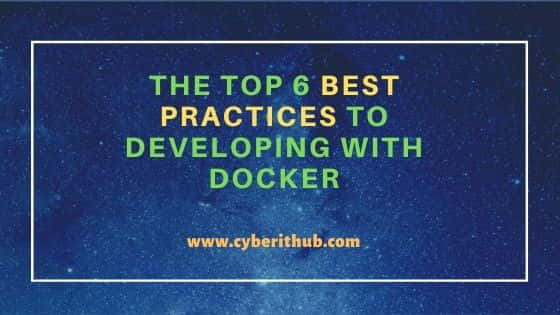 Docker is one of the most useful and powerful tools for administrators and developers to tackle complicated application development projects consisting of applications with many microservices. It gives the ability to develop, test, and deploy software products continuously. This post will look at some of the best practices that developers and administrators can use when working on Docker.

The best practices we will talk about in this post are not the ones outlined by Docker on their official site. Those are the ones everyone knows. These are the ones established by developers who have worked on Docker for a long time.

Security is the most important thing you have to take care of when developing an application using Docker. You should use only secure components for building the container and avoid using any open source resource with a dubious security status.

The best practice for making sure that your application is developed safely is using Docker Security Scanning. It is a process that scans all the components of the container for known security vulnerabilities.

This gives you a chance to rectify any security situation in the container before it is published to a registry.

Of all the best practices we will discuss in this post, this is the most important one. Cybersecurity is more important now than ever, and compromising it can have grim consequences for you.

The next best practice for Docker development is to keep the images as small as possible. This enables the container to pick up the container quickly and easily load into the memory. Here are some suggestions for making that possible:

While developing with Docker, it is important to avoid storing application data in the writable layers of the container using storage drivers. This leads to increased container size and decreased efficiency from an I/O perspective. The correct approach is to use volumes or bind mounts for storing the data.

Keep the Docker Version Up to Date

While using Docker for development, it is a good practice to create separate environments for development, testing, integration testing, and deployment. This makes it possible for the developer to keep the Docker files separate and execute them safely without affecting the final build.

There should only be a single concern linked to each container. Decoupling applications does not only make horizontal scaling easy but also lets you reuse containers. For example, you can make a web application stack consisting of various different containers, each based on its unique image. These can be used to manage the database, web application, and the in-memory cache in a decoupled way.

Limiting the containers to a single process per container is a good rule of thumb but is not something you necessarily have to follow. For instance, in addition to just being spawned with an init process, some programs might initiate further processes on their own. Celery, for example, can spawn multiple worker processes, and Apache can only create one process per request.

It is at your discretion to keep the containers as modular and clean as possible. Use Docker container networks to make sure that the containers can effectively communicate with each other.

Docker is the latest platform that makes fast development and deployment of applications possible, but there are some things that you need to keep in mind in Docker development, some best practices. The most important thing is to give proper consideration to security and use Docker image security scanning to make sure no vulnerability exists inside the containers. Others include keeping the image size as small as possible, storing the data correctly, using the latest Docker version, developing and testing in different environments, and decoupling the applications to get the best results from your Docker development experience.