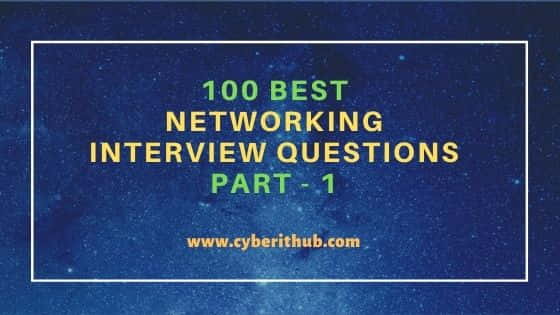 1. Which Modulation Technology does 802.11a utilized ?

2. Under which layer does Internetwork Packet Exchange(IPX) comes ?

3. Which are the common protocols used in Session Layer ?

5. In which layer of OSI model MAC address lies ?

6. In which layer of OSI Model repeater lies ?

7. What is the command to display arp cache entry for specific ip address in windows ?

8. What is the command to display IP Address of a host machine in Windows ?

9. What is the command to display IP Address of a host machine in Linux ?

10. What is the command to display hostname of a Linux node ?

11. What is the command to display a Cached Name table of a Computer in Windows ?

12. What is the command to display network connections in a Linux/Windows host ?

13. Where does Power over Ethernet(PoE) switch will be useful ?

Ans. It will be useful in the scenario where you do not have any power outlet at the point you placed your access points.

Ans. It is basically virtually dividing the network into multiple segments at the switch level and calling each segment as Virtual LAN.

15. What is Network Address Translation(NAT) ?

Ans. It is a mechanism through which one range of IP address is been translated to another range of IP Address to hide the real IP.

Ans. DHCP is known as Dynamic Host Configuration Protocol.It is used to provide an IP address dynamically whenever client request it.

17. What is Virtual Private Network(VPN) ?

Ans. It is used to setup secure tunnel between two locations either over the public network or over a dedicated leased line.

18. Which Layer PDU is known as Packets ?

19. Which protocol EIGRP Uses for the Delivery and reception of EIGRP Packets ?

20. What is main difference between TCP and UDP Protocol ?

Ans. TCP provides the package delivery acknowledgement but UDP does not.

21. Which protocol was replaces by OSPF(Open Shortest Path First) ?

22. What is the administrative distance of OSPF ?

23. What is the administrative distance of RIP ?

24. What is the administrative distance of EIGRP ?

25. What is packet collision ?

Ans. It is an event which occurs when two or different networks share a common medium to transfer the data and started sending packets simultaneously.

27. What are the few different protocols in Application Layer ?

28. What are the 3 different functions performed by Presentation Layer ?

29. What are the few protocols used in Presentation Layer ?

30. What are the different functions performed by Session Layer ?

Ans. It is the maximum number of hops packet will take in a network before being dropped out.

32. Which protocol allows to join and leave multicast groups ?

33. What protocol helps in resolving IP address to MAC Address ?

34. What are the protocols usually used in Transport Layer of OSI Model ?

35. What is the default port for SSH Connection ?

36. What is Routing Information Base(RIB) ?

Ans. Link-state algorithms store routes locally in a separate database before updating the main routing table. This database is called a routing information base.

37. What is VLAN Trunking Protocol(VTP) ?

Ans. It is a protocol used for exchanging VLAN information within the network. This protocol is used by Cisco Switches.

38. Which is the default port for FTP Connections ?

39. Which is the default port for telnet protocol ?

40. What are the few different examples of Layer 3 Protocol ?

43. How transport protocol checks that data are not corrupted during transfer ?

Ans. It is a concept in which data is destined for multiple destinations at the same time.

45. What is the use of ATM(Asynchronous Transfer Mode) Networks ?

Ans. It is used for carrying audio and video data in a network.

Ans. It usually denotes the payload transferred over a network.

48. In which Layer Packet Segmentation Occurs ?

Ans. Frame is the terminology used for Protocol Data Unit in Layer 2 of OSI Model.

Also Read: Networking: All in One for Dummies