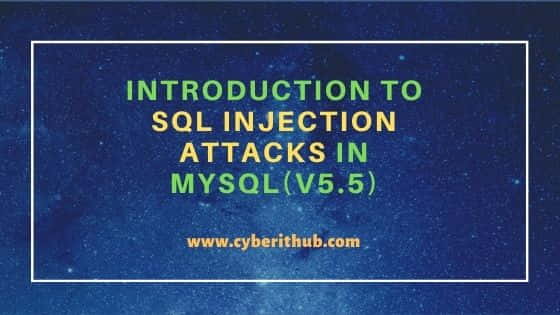 In this article, I will take you through the concepts of SQL Injection attacks in MySQL. SQL is the acronym for Structured Query Language. It is used to retrieve and manipulate data in the database.

What is SQL Injection ?

SQL injection is a code injection technique, used to attack data-driven applications, in which malicious SQL statements are inserted into an entry field for execution (e.g. to dump the database contents to the attacker).

It must exploit a security vulnerability in an application's software, for example, when user input is either incorrectly filtered for string literal escape characters embedded in SQL statements or user input is not strongly typed and unexpectedly executed. SQL attacks is mostly known as an attack vector for websites but can be used to attack any type of SQL database.

In-band Injection is the most common and easy-to-exploit of SQL Injection. In-band Injection occurs when an attacker is able to use the same communication channel to both launch the attack and gather results.

The two most common types of in-band SQL Injection are Error-based SQLi and Union-based SQLi.

Error-based SQLi is an in-band SQL Injection technique that relies on error messages thrown by the database server to obtain information about the structure of the database. In some cases, error-based SQL injection alone is enough for an attacker to enumerate an entire database. While errors are very useful during the development phase of a web application, they should be disabled on a live site, or logged to a file with restricted access instead.

Union-based SQLi is an in-band SQL injection technique that leverages the UNION SQL operator to combine the results of two or more SELECT statements into a single result which is then returned as part of the HTTP response.

Inferential SQL Injection, unlike in-band SQLi, may take longer for an attacker to exploit, however, it is just as dangerous as any other form of SQL Injection. In an inferential SQLi attack, no data is actually transferred via the web application and the attacker would not be able to see the result of an attack in-band (which is why such attacks are commonly referred to as “blind SQL Injection attacks”). Instead, an attacker is able to reconstruct the database structure by sending payloads, observing the web application’s response and the resulting behavior of the database server. injection attack.

The two types of inferential SQL Injection are Blind-boolean-based SQLi and Blind-time-based SQLi.

Boolean-based Injection is an inferential SQL Injection attack that relies on sending an SQL query to the database which forces the application to return a different result depending on whether the query returns a TRUE or FALSE result.

Depending on the result, the content within the HTTP response will change, or remain the same. This allows an attacker to infer if the payload used returned true or false, even though no data from the database is returned. This attack is typically slow (especially on large databases) since an attacker would need to enumerate a database, character by character.

Time-based SQL Injection attack is an inferential SQL Injection technique that relies on sending an SQL query to the database which forces the database to wait for a given amount of time (in seconds) before replying. The response time will indicate to the attacker whether the result of the query is TRUE or FALSE.
Depending on the result, an HTTP response will be returned with a delay, or returned immediately. This allows an attacker to infer if the payload used returned true or false, even though no data from the database is returned. This attack is typically slow (especially on large databases) since an attacker would need to enumerate a database character by character.

Out-of-band SQL Injection is very frequently used technique, mostly because it depends on features being enabled on the database server being used by the web application. Out-of-band Injection occurs when an attacker is unable to use the same channel to launch the injection attack and gather results.
Out-of-band techniques, offer an attacker an alternative to inferential time-based techniques, especially if the server responses are not very stable (making an inferential time-based attack unreliable).

Out-of-band SQLi techniques would rely on the database server’s ability to make DNS or HTTP requests to deliver data to an attacker. Such is the case with Microsoft SQL Server’s xp_dirtree command, which can be used to make DNS requests to a server an attacker controls; as well as Oracle Database’s UTL_HTTP package, which can be used to send HTTP requests from SQL and PL/SQL to a server an attacker controls.

In the above example, we used manual attack techniques based on our vast knowledge of SQL. There are automated tools that can help you perform the attacks more efficiently and within the shortest possible time. These tools include