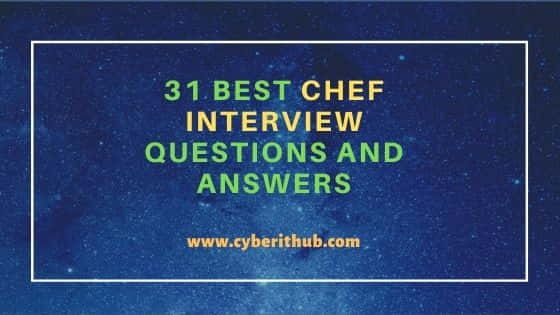 In this article, I will take you through 31 Best Chef Interview Questions. Chef is a very frequently used tool in Automation and DevOps Platform. So it is very imperative to know about Frequently asked Chef Interview Questions for those who is looking to build his career in DevOps Platform. Here we will go through best chef interview questions which has been asked in many interviews.

Also Read: How to Install Chef 13 on RedHat/CentOS 7

3. What is the meaning of -d in knife role create -d <role_name> command ?

Ans. This option tells to skip the opening of the editor and accept all the default values.

5. Which command can be used to edit Chef Roles ?

6. What are the sources components constitutes the run list ?

7. What is the order of precedence during computation of hashes ?

8. Why do we require data bags when we already have attribute data ?

Ans. Attribute data represents the state of the node at the time the client is being run but the data bags contains free form data which is not attached to any role or cookbook or a node.It can be used anywhere for any requirements.

9. Which command is used for converging a node ?

Ans. Cookbook is a list of recipes in a proper order to manage the resources in an Infrastructure applied in a Certain way.

11. Which tool can be used to bootstrap the chef server configuration ?

12. Which command is used to check the status of services ?

13. What is the command to list all the installed cookbooks ?

14. What is the command to upload cookbook to the chef Service ?

15. Which template language is used by Chef to generate configuration files ?

Ans. It is because ERB is widely available and requires no extra dependencies.

17. What are the three key attributes of the template resource ?

18. How to install ChefSpec through gem ?

19. Which tool can be used to manage gem versions ?

20. How to install bundler through gem ?

22. How to use custom json data in Chef Cookbook ?

23. How to provide a customer node name using Chef Cookbook ?

26. How to activate recipe mode in Chef Shell ?

28. How to interact with currently defined attribute in Chef ?

29. How to enable attribute mode in Chef Shell ?